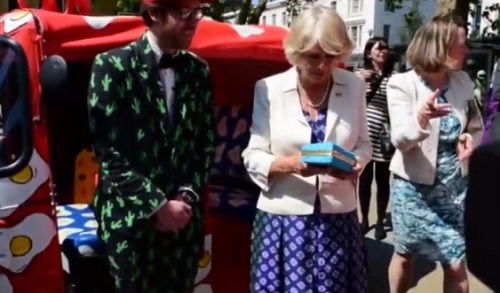 Camilla Parker-Bowles, the Duchess of Cornwall, isn’t the most fashionable royal of them all. Her elder-chic style reeks of ineloquence and artificial extravagance – dead trees at a bonfire have more pizazz than Camilla. On Thursday, June 12, Camilla attended a charity event in memory of her late brother Mark Shand. The Duchess of Corn(wall) bedazzled the harshest critics when she stepped out “donning a blue dress, white blazer and pearls.” All was well in the land of Camilla’s garb, until we witnessed one of the most horrific clutch bags ever seen by sentient beings. The unorthodox little purse-thingy was “shaped like a can of baked beans”. I repeat, it was shaped like a can of baked beans!

As President of the Elephant Family (no, don’t go there) – a conservation charity founded by her late brother – Camilla helped with the unveiling of Tara, a colourful, ten-foot tall elephant statue. Everyone squealed with delight, including fifty schoolchildren, several lonely baked beans, and a teary Camilla. Bless her heart.

But this wasn’t the beginning of some altruistic crusade from fashion hell. No, no, it started earlier in the morning at a city farm where pigs and Camilla united like forlorn lovers. During her visit to Jamie’s Farm, named after the children’s charity of which she is a patron, the Duchess had a long talk with a squealing piglet. Tapping its little piglet head, Camilla said softly, “Oh you poor thing, you’re not very happy are you? I think he’s a bit frightened.” Of course the little piglet was frightened! What would you have done if Camilla patted you on the face and called you a “poor thing?”

Camilla is an animal lover, but animals aren’t necessarily Camilla lovers. Bored with the squealing piglet, Camilla turned her photo-op attention to a fascinated kid. The two had a fat chat about piglets, Prince William, baked beans and – no, they didn’t. He told her he loved working with animals. She told him, and I quote, “The nice thing about animals is that you can just come down and work and talk to them when things get too much – although probably not here as it’s a bit noisy.”

What do you think about Camilla’s charity outing? Would you wear a clutch bag shaped like a can of baked beans? Let us know your thoughts in the comments below.