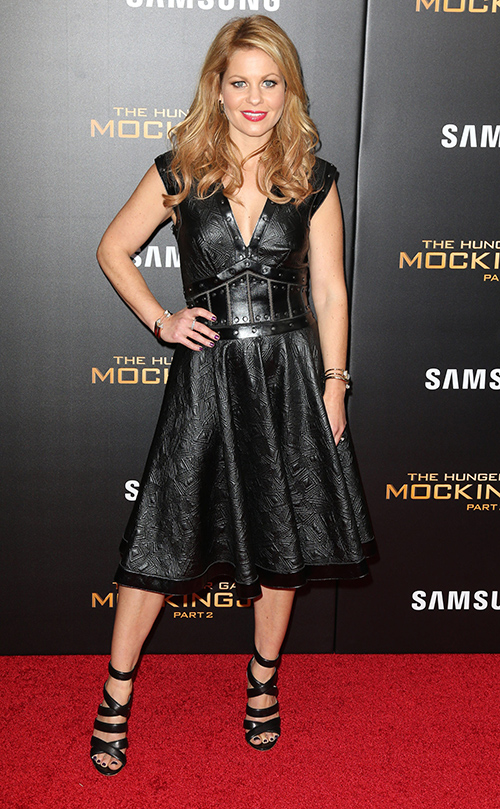 Candace Cameron Bure sounds crushed about not receiving an invite to former co-star Mary Kate Olsen’s recent marriage to Olivier Sarkozy, but the Fuller House star is cracking jokes to cover up hard feelings over the wedding snub.

Cameron Bure was at the Cosmo 100 lunch hosted by Cosmopolitan magazine on Monday, December 7 when she was asked about Mary-Kate Olsen’s November wedding. Candace quipped, “My invitation must have gotten lost in the mail.” Then the uber conservative co-host on The View followed up with, “I’m not a smoker, so I might not have had much fun.” Then, with as much insincerity as Cameron Bure could muster, she said, “I’m really happy for Mary-Kate though. I really am.”

It seems that everyone is “happy for” Mary-Kate but no one really has communication with her. It also seems that the wedding snub had nothing to do with Candace Cameron Bure’s ultra conservative lifestyle. Olsen has cut off all of her former Full House co-stars with the exception of her identical twin sister Ashley Olsen.

Mary-Kate’s former TV dad was also ignored when it came to the guest list. Bob Saget admitted he too was left out of Mary-Kate Olsen’s major milestone but wasn’t too upset by it. Bob Saget said on The Today Show after Olsen got hitched, “I was not invited, but I’m very happy, and I sent a mazel tov text.”

Mary-Kate and her French banker husband got married on November 27 and there were reportedly only 50 guests in attendance. The reclusive former child star made headlines not only for marrying a much older man (Mary-Kate is 29 and Olivier Sarkozy is 46) but also for some of the strange centerpieces at Mary-Kate Olsen’s wedding. Guests were encouraged to help themselves to a smoke via the bowls of cigarettes laid out on tables during the reception. Other details concerning the odd celebration are sparse, but that’s probably because we’re still envisioning a bowl of cigarettes.

On top of the wedding snub, Mary-Kate Olsen refuses to make any appearance on the upcoming Fuller House. The Full House revival is coming to Netflix in 2016 and will pick up the Tanner family story except this time it will be centered around Candace Cameron Bure’s character DJ. Although everyone else from the classic sitcom plan to come back even if just for a cameo, both Mary-Kate and Ashley Olsen refuse to dig up ancient history and return to their TV family for a reunion.