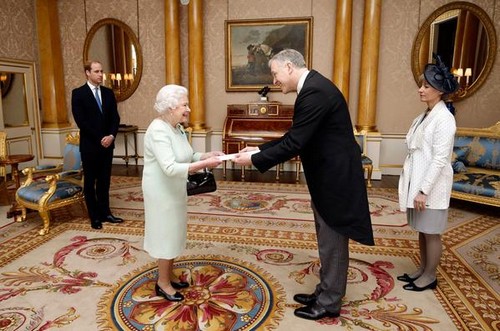 It’s becoming clear that Kate Middleton wants as little to do with the extended royal family, including Queen Elizabeth, Camilla Parker-Bowles, and Prince Charles, as possible. By the very nature of The Duchess of Cambridge’s role, it’s impossible to disassociate with the British monarchy entirely, but Kate Middleton and even Prince William are well on their way to drawing up clear boundaries. For example, Carole Middleton has reportedly become the ‘third person’ in Kate’s and Will’s marriage, especially as Kate’s been suffering through her second pregnancy and hasn’t had much time to spend with Prince William or Prince George. However, Carole’s new role comes at the expense of the rest of the royals, who are reportedly being driven to the side as Carole takes over more and more of Kate’s and Will’s family life.

The Daily Mail’s new report says as much, with their royal sources adding, “There are three people in that marriage, a result of Kate feeling quite ill at the beginning of this pregnancy and exhausted all the way through. She has relied on Carole. If the Middletons have hijacked the Cambridges, then one can only say that William rather likes it.”

As if that wasn’t enough, the source also adds, “Carole helps with every decision, from what tie William should wear to an engagement to what curtains the new nursery at Anmer Hall should have. Kate is a perfectionist but is too tired to keep it up while pregnant and trusts her mother’s taste — she learned everything from her.”

Basically, Carole Middleton is running Kate Middleton’s and Prince William’s lives [and to an extent, Prince George’s life], which means that Queen Elizabeth, Camilla Parker-Bowles, and Prince Charles have that much less influence over their younger counterparts. While that’s not a big problem now, it might start to become an issue as Charles starts to gain more power. At the end of the day, we know that the majority of the royals don’t respect the Middletons and consider them ‘commoners’. How do you think they feel knowing that these ‘commoners’ are handling their most precious PR tools, and TWO of the future heirs to the monarchy?