Celebrity Apprentice Spoilers: Does Geraldo Rivera’s Mustache Continue to Dominate or Will He Be Fired? 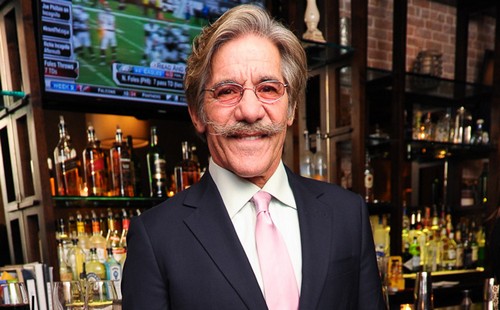 Will Geraldo Rivera get fired by Donald Trump on Celebrity Apprentice? Spoilers predict that fans want Geraldo gone! I had a lot more respect for Geraldo Rivera before I saw him on Celebrity Apprentice 2015. I always thought of him as a competent journalist, aside from that major SNAFU of finding absolute nothing in Al Capone’s vault. He always seemed like he had his crap together when he reported from war zones and such. Even his sleazy tabloid talk show was good clean fun – especially when he got his nose broken in an on-set brawl.

But on Celebrity Apprentice Season 14, he’s been nothing but a screen-hogging diva whose mustache is outsized only by his ego. Starting from the first moments of the show, he’s been determined to make it the Geraldo Rivera show. He pushed and pushed and pushed and pushed (and pushed) to get the men’s team name to be Vortex. Ian and the others finally caved because he wouldn’t shut up and they couldn’t move on to the real task at hand until they got the team name.

Anybody watch Big Bang Theory? It’s like when Sheldon pitches a fit to get his way and everyone caves because life can’t go on until then. It’s charming and quirky on a sitcom, but irritating as hell in real life. In the first challenge of the season, I’ll give Geraldo props for making the most money, but he also had giant posters made of his face with the other celebs looking like movie extras in the background. His mustache was literally three feet wide on those. It was insane.

Plus he held meetings for the sake of holding meetings. It was like a flashback to the 1980s. Then later, when Trump asks if he thinks the men won, Geraldo says he thinks the men dominated because they were Team Vortex. WTF? It’s like talking to a crazy uncle at a family reunion. On the second challenge, even though he was no longer project manager, Geraldo couldn’t be a team player. He said he won’t be trifled with and accused the PM of trying to sideline him. So what? That’s the PM’s option to do so.

During their meeting with the sponsor company, Geraldo took a phone call and wouldn’t leave the room. He shouted into his cell phone (because he’s old as dirt and hard of hearing – like the uncle at the reunion) and acted like the rudest jerk on the planet. Everyone was open mouthed at his rudeness but he carried on, because whatever he’s doing is more important than anything else – obviously. Geraldo also whined and whined because he wasn’t the voice over artist – they got Mike Rowe instead.

Sorry, Geraldo, at this stage of the game, most people know Mike Rowe’s voice from Dirty Jobs, Deadliest Catch and Ford and Walmart commercials. He’s an amazing talent while Geraldo’s voice is recognizable only when he tells you it’s him. Plus, everything can’t be the Geraldo show (or can it?). And Kevin Jonas seems pretty social media and business savvy yet Geraldo pitched a bitchy fit and got him fired because he knew Kevin could kick his ass.

Also, Geraldo has come up with the worst slogans in the history of the show including “Neat, Sweet” (what does the word sweet have to do with frozen foods?) and another that was so long you forgot the beginning by the time it ended. “Eat lean, live long, love Luvo for a delicious life.” Catchy, right? Wrong! That one definitely falls under WTF? That one nearly got Terrell Owens fired if it hadn’t been Gilbert Gottfried’s inappropriate sex jokes that got him canned instead.

The bottom line is that Geraldo Rivera is a mustachioed megalomaniac that acts like a tempestuous toddler if he doesn’t get what he wants. Fingers crossed he finally gets fired boot tonight and we can get down to some serious Celebrity Apprentice without his cranky codger antics. Anybody else besides me hoping to see Brandi and Kenya get in a cat fight and ripping each others weaves out? Fingers crossed!! Check out my recap of tonight’s [January 12, 2015] show right here!