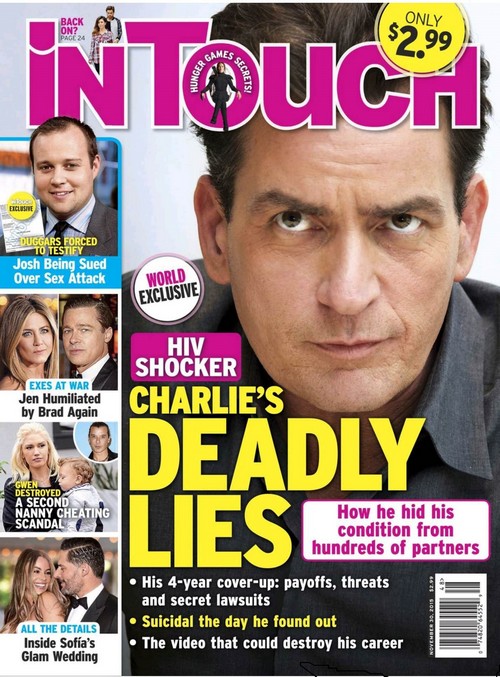 Charlie Sheen may be facing jail time after revealing he is HIV positive. Authorities may decide to pursue criminal charges if they can prove Charlie had intent to infect sexual partners.

Matt Lauer sat down with Sheen on the “Today” show Tuesday, November 17 and the actor admitted he is HIV positive. Sheen revealed that he was diagnosed approximately four years ago, sometime in 2011. Charlie admitted to having sex with two women since the HIV positive diagnosis – but claims both were told and were under the care of his physician.

Numerous sources say this is not the case. Sheen has had many more partners in the past four years and never revealed they were being exposed to the potentially deadly virus. In Touch insiders claim Sheen told them that “his viral load is very low and the disease is practically undetectable.” According to sources this is how Charlie justified keeping the HIV diagnosis from sexual partner, as well as Sheen’s reasoning that he didn’t need to use protection.

Even with medication HIV can still be spread. If Sheen continued to have unprotected sex and didn’t tell partners then authorities may have enough to pursue criminal charges against Sheen. In California it is a felony for a person to “willfully expose others to the human immunodeficiency virus.” The crime is punishable by up to eight years in prison.

Bree Olson, one of the “goddesses” who lived with Charlie Sheen in 2011, revealed to Howard Stern on Tuesday, November 17 that the couple often had unprotected sex. When Olson and Sheen did use condoms they were lambskin which can protect against pregnancy but not against sexually transmitted diseases.

Olson told the talk show that for the year the couple was together, 2011 until 2012, Charlie knew he was HIV positive but kept the diagnosis a secret from her.

In the interview with Matt Lauer, Sheen said that the purpose of coming forward now is an attempt to stop those close to him from continuing to extort money in exchange for their silence. The “Anger Management” star doesn’t seem to understand that “coming forward” is not about stopping extortion attempts.

Disclosing an HIV positive diagnosis is a moral obligation and a legal necessity. And now it is quite possible that Charlie Sheen will not only face civil lawsuits and pay out millions of dollars, but the “Two and a Half Men” star may end up spending years in prison.