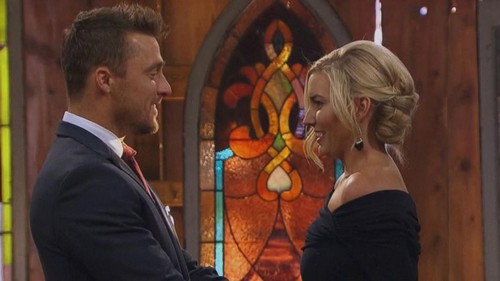 Chris Soules and Whitney Bischoff have already broken up – and according to new reports it is because he cheated on the 2015 winner with her best friend! The Season 19 finale of The Bachelor aired on ABC this week, and Chris Soules got down on one knee and proposed to Chicago fertility nurse Whitney Bischoff after he sent home runner-up Becca Tilley broken-hearted.

During the After The Final Rose live show, Chris and Whitney sat down for an interview with Chris Harrison and the couple appeared to have done a complete 180. While they were filming the show they gushed about how excited they were to get married, but they suddenly had a change of heart and announced there would not be a wedding anytime soon – they just wanted to enjoy being a “normal couple.”

Chris and Whitney’s wishy-washy attitude about setting a wedding date set off from red flags for Bachelor fans and had everyone speculating that they may have already broken up. And, according to the March 23 cover of Life & Style Magazine – The Bachelor and his new fianceé have already broken up, their engagement was rocked by a messy cheating scandal! The all new L&S cover screams, “Chris & Whitney Over Already: He Slept With Her Best Friend.” The magazine’s cover goes on to tease an inside story on the moment that Whitney Bischoff realized that Chris Soules was just “using her for fame and money.”

As far as Chris Soules cheating on Whitney Bischoff with her best friend – we’re not sure when he found time to do that because he is reportedly already cheating on her with his former fiancée Sheena Schreck. Is he using her for fame and money? Absolutely! Since filming the Bachelor Chris Soules has taken up residence in California and is loving the celebrity lifestyle, he never returned to his family farm in Iowa. And, he just scored a coveted position on Dancing With The Stars, he is not planning on giving up the limelight any time soon.

So, did you watch Season 19 of The Bachelor? Are you surprised Chris and Whitney already broke up, or do you think they will still get married? Do you think Chris really cheated on Whitney with her best friend? Let us know what you think in the comment below! 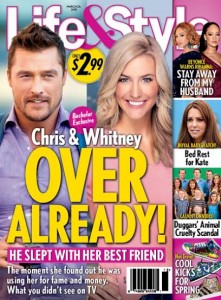