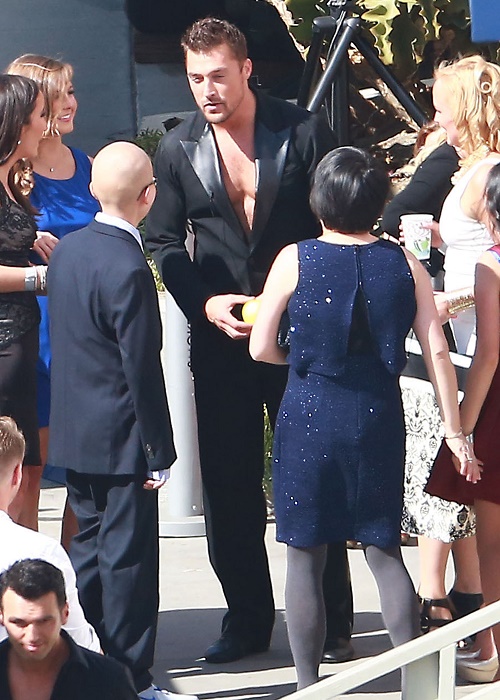 Chris Soules is reportedly cheating on his 2015 winner Whitney Bischoff with his Dancing With The Stars partner Witney Carson – but Bischoff is totally cool with it. Since The Bachelor finale aired on ABC and farmer Chris moved to Hollywood it became very clear that he had no intention of settling down and getting married to Whitney Bischoff, he loves his new celebrity status way too much to tie himself down to just one girl. But Whitney Bischoff doesn’t seem to mind that Chris Soules is blatantly cheating on her.

Why would Whitney be okay with her fiancé cheating on her? Before Bischoff joined The Bachelor she was living a pretty uneventful life as a single nurse in Chicago. Since she won and Chris Soules proposed to her on national television, Whitney is loving all of the attention and limelight – and the last thing she wants to do is return to Chicago, single again, and fade in to obscurity like so many previous Bachelor contestants have after their relationship failed.

Not only is Whitney okay with Chris Soules cheating on her, but she actually is encouraging the showmance and bragging in interviews about planning her and Chris’s quaint “farm wedding” after he finishes his stint on Dancing With The Stars. An insider close to Bischoff dished to CDL, “Whitney isn’t as clueless as everyone thinks she is. She’s not blind, she knows Chris has cheated on her and she knows they aren’t getting married. But they both need each other. If they break up now or don’t at least pretend to be planning a wedding, pretty soon no one will care about them anymore.”

Would you be able to swallow your pride and pretend to be engaged to someone who is making a fool out of you and cheating on you just to hold on to your five seconds of fame? How much longer will Whitney and Chris’s showmance last? Let us know what you think in the comments below and don’t forget to check CDL tomorrow for more Bachelor and Bachelorette spoilers and news.