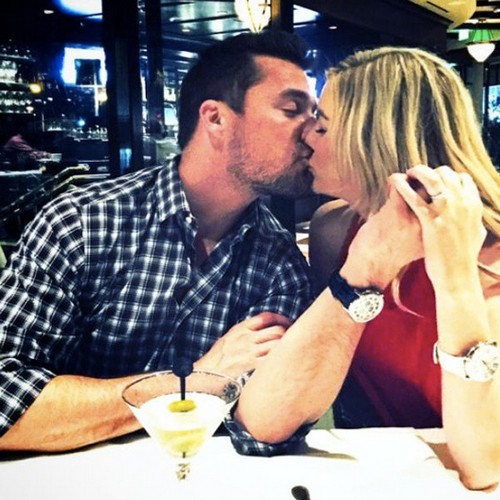 Is Chris Soules going to be a dad? Rumor has it that the Bachelor’s fiancée Whitney Bischoff is pregnant with his baby – and she might not be the only one! Bachelor producers are currently panicking because they are afraid that Chris Soules got his fiancée Whitney Bischoff pregnant, and his Dancing With The Stars partner Witney Carson pregnant as well.

Whitney Bischoff is not a fool, she knows that Chris Soules has been cheating on her and that they are never really getting married – but before she surrenders and heads back to her mundane life in Chicago, the nurse has been determined to at least get pregnant. Sources close to Whitney Bischoff have already dished in interviews with the press that Whitney desperately wanted a baby, since she grew up without her parents or family. The 2015 winner could really care less if she gets married, she just wants a baby of her own. Now, rumor has it that Whitney’s dreams have finally come true and she is pregnant with Chris Soules’ baby, but she might not be the only one!

It’s no secret that Chris Soules has been reportedly cheating on his fiancée with his Dancing With The Stars partner Witney Carson – but apparently the lectures Chris Harrison gave Chris Soules on birth control went in one ear and out the other. The Bachelor producers could really care less what Chris Soules does in his free time, as long as he keeps up his showmance with Whitney Bischoff and makes the franchise appear legit. Getting another woman pregnant who is not your fiancée – is not going to help the franchise appear legit.

According to a DWTS insider, everyone on the set of DWTS has been whispering that Carson is pregnant – all the signs are there! And, Chris Soules and the Bachelor producers are furious. Our insider dished to CDL, ”The Bachelor producers confronted Chris Soules and demanded to know if Witney Carson was pregnant. Chris insists that she isn’t, but everyone has noticed that she has been ill at rehearsals lately and extremely emotional.”

Do you think that Whitney Bishcoff is really pregnant? What about Witney Carson? Can you imagine Chris Soules having two babies by two different women…at the same time? How do you think Chris Harrison and The Bachelor producers will try to spin this if both women are really pregnant? Let us know what you think in the comments below and don’t forget to check CDL tomorrow for all of your Bachelor spoilers and news.