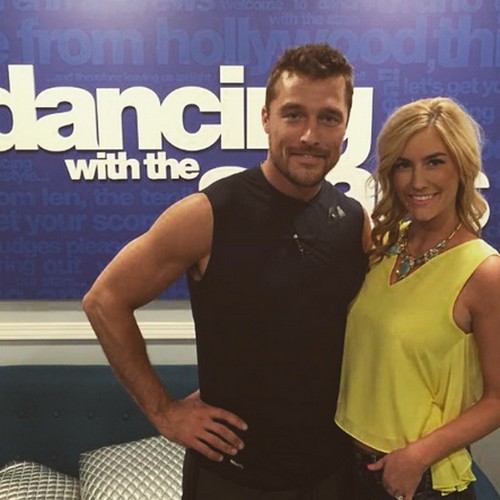 After their March 29th Dancing With The Stars performance, Chris Soules took the two women in his life, Whitney Bischoff and Witney Carson, out to celebrate – talk about awkward! Can you imagine having to smile in the girl’s face that your fiancé is cheating on you with? Whitney Bischoff has gotten herself in to a little pickle: she doesn’t want to go home to Chicago and break up with her cheating fiancé and kiss her new life of red carpets and star-studded dinners goodbye, and fade into Bachelor obscurity. But, in order to stay in the spotlight, she has to swallow her pride and pretend that she doesn’t know that Chris Soules is cheating on her with his dancing partner, and keep up their sham of a romance.

In Whitney Bischoff’s defense, Chris Soules could really care less about Witney Carson’s feelings as well. At the end of the day, his relationships with both women are nothing more than an excuse to get his name in the headlines and remain relevant. An insider close to Chris Soules’s circle dished to CDL, “Right now Chris just wants to enjoy his fame and live it up. He doesn’t want a relationship with either women, but he keeps them around because the scandals are just making him more famous. Chris grew up in Iowa, he is having the time of his life right now in California and he isn’t going to let his dancing partner or his fiancee’s feelings get in the way of that.”

At this point, we don’t even feel sorry for Whitney Bischoff anymore. There is a high-price to pay for fame, and Whitney is paying by staying in a fake engagement and letting her fake fiancé make her look foolish. The real question is, how many more dinners with Chris’s mistress can Whitney Bischoff sit through before her pride gets the best of her and she finally snaps?

What do you think of Chris Soules cheating on Whitney with Witney? Do you think you would be able to turn the other cheek? Let us know what you think in the comments below and don’t forget to check CDL tomorrow for more Bachelor and Bachelorette spoilers and news!