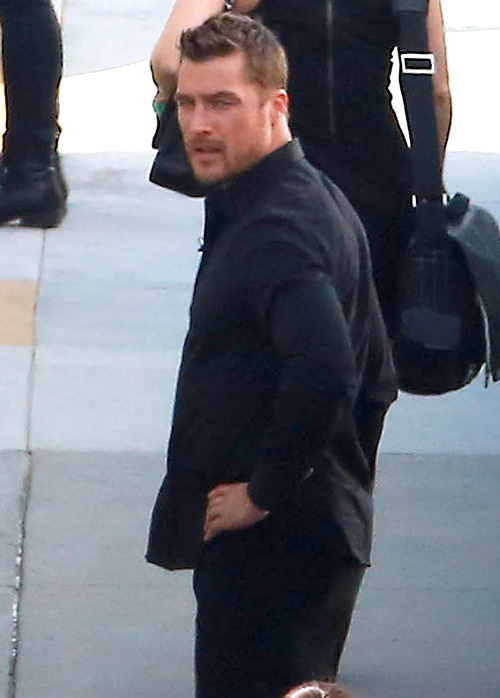 Despite rumors of Chris Soules cheating with ex-fiancee Sheena Schreck and DWTS partner Witney Houston Whitney Bischoff is working to help the philandering farmer land a new reality TV show! Chris Soules is campaigning for another TV show! The Bachelor Chris Soules was painted as a charming farmer from Iowa by the producers of the ABC reality TV show – but the truth is he has no intention of being a farmer anymore. He got a taste of Hollywood and doesn’t want to give up the spotlight. Since The Bachelor finale and his engagement to Whitney Bischoff, Chris Soules joined Dancing With The Stars and has continued to make headlines. But, according to new reports, Soules is already trying to land another reality TV show, so that he can remain in the spotlight after DWTS is over.

According to an all new report from Life & Style Magazine, Chris Soules has been pitching a reality TV show about he and Whitney Bischoff’s life on his farm in Iowa after his run on Dancing With The Stars is over. L&S’s inside sources revealed, “He’s pitching a reality show about life on the farm with Whitney. And now that he’s had a taste of stardom, he’s set on staying in Hollywood. A reality show about his life in Iowa with Whitney will let Chris sustain the fame he loves so much. He feels that with her by his side, the public will love him and that creates business opportunities. He loves the attention he’s gotten from being on TV, so he wants to keep this going for as long as he can.”

It’s no secret that Chris Soules and Whitney Bischoff aren’t getting married anytime soon. Chris has been rumored to be cheating on Bischoff with his dancing partner Witney Carson and ex-fiancee Sheena Schreck. Whitney seems well aware that Chris is just stringing her along to keep the showmance going, and she doesn’t seem to mind. After all, before she joined The Bachelor she lived a mundane life in Chicago as a nurse – so being Chris Soules’s fake fiancée must be a bit more exciting.

What do you think of Chris Soules starring on another reality show? Would you tune in to watch his and Whitney’s fake showmance, or will the show be a flop? Let us know what you think in the comments below and don’t forget to check CDL tomorrow for more Bachelor and Bachelorette spoilers and news.