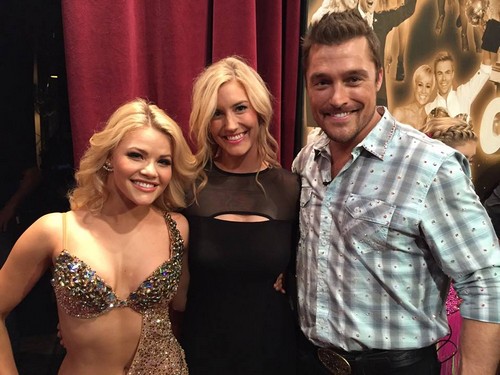 Did Chris Soules dump Whitney Bischoff for his Dancing With The Stars partner Witney Carson? Since The Bachelor joined Season 20 of ABC’s DWTS, rumors have been floating around that he was cheating on his 2015 winner and fiancée Bischoff with 21 year old Witney Carson. On May 28 Chris and Whitney released a statement confirming what we all already knew, that they had officially broken up and the wedding was cancelled. According to a new report – Witney Carson may have played a huge part in The Bachelor couple’s break-up.

This week’s edition of In Touch Magazine reveals that Whitney Bischoff was just as suspicious as we were about her fiancé Chris’s relationship with his DWTS partner Carson. Whitney and Chris Soules’s engagement was basically doomed from the start and the cards were stacked against them, but according to In Touch’s sources – one of the main reasons Bischoff and Chris broke up was because of Witney Carson. The magazine’s insider dished, “She always thought something was going on between them because their chemistry was so undeniable. No one would be surprised if Chris and Whitney started hooking up right away.”

So far Chris Soules and Whitney Bischoff have remained mum about their break-up, and neither have been spotted out with a new boyfriend or girlfriend. But, In Touch’s sources say that Chris Soules isn’t sitting at home and mourning the end of his engagement – and it is only a matter of time before he and Witney Carson get together. Apparently, the Iowa farmer just has a weak spot for the name Whitney/Witney.

So Bachelor fans, were you shocked by Chris and Whitney’s break-up, or did you see it coming a mile away? Do you believe the reports that The Bachelor is going to start dating his 21 year old Dancing With The Stars partner? Let us know what you think in the comments below!