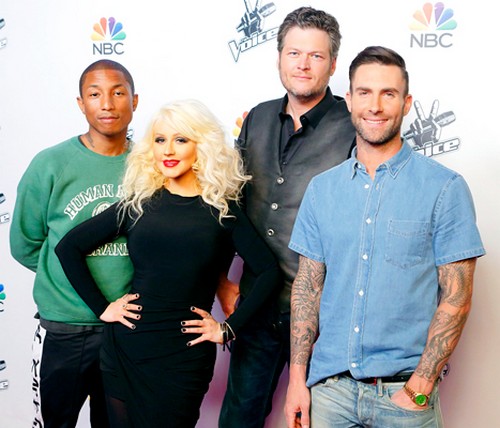 Gwen Stefani is getting the thrown off The Voice and replaced by Christina Aguilera! Season 9 of “The Voice” just kicked off on NBC with Adam Levine, Blake Shelton, Pharrell, and Gwen Stefani serving as the contestant’s coaches. But, don’t get too comfortable with Gwen Stefani at the judges’ table – because according to a new report the No Doubt singer is out after Season 9, and Christina Aguilera will be taking back her chair (again) for Season 10 of the singing competition. NBC made the formal announcement on Wednesday October 7.

Of course, “The Voice” fans are a bit skeptical of the timing of NBC’s decision to bring back Christina Aguilera. Blake Shelton and Gwen Stefani both went through super messy divorces right before they began filming Season 9 of the NBC reality show.

And, multiple reports have hinted at a budding relationship between Gwen and Blake. At first it was just some casual flirting, but now sources say that the two coaches are together constantly and they leave rehearsals together for some alone time.

“The Voice” producers obviously encourage some flirting and banter between the judges – it makes for good TV. But, Blake Shelton and Gwen Stefani actually hooking up on the set could lead to some serious problems among the cast and crew. And, when things go sour between them (which they most likely will, after all it is Blake Shelton) – the last thing they want is for Blake and Gwen to bring their drama on to live television or to create a disturbance on the set. Then again, this could all be pure speculation – and NBC might just think that Christina Aguilera pulls in better ratings than Gwen Stefani.

Are you happy that Christina Aguilera is returning to “The Voice?” Do you think that it has anything to do with the rumors about Blake and Gwen hooking up? Let us know what you think in the comments below!