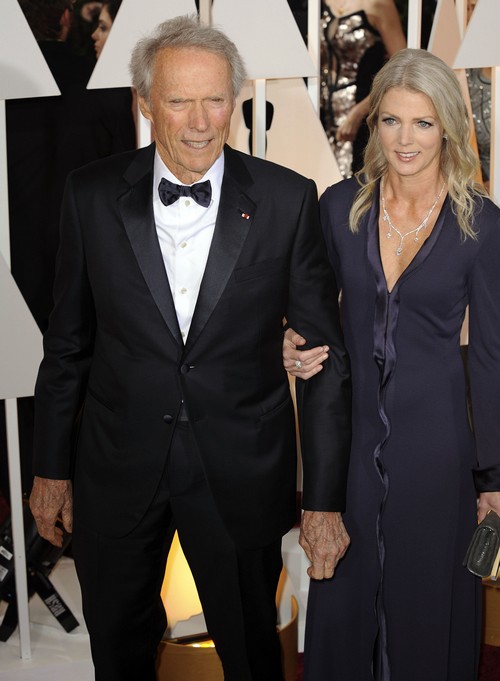 Clint Eastwood might happily be showing off his new girlfriend, 51-year-old Christina Sandera, during awards seasons and red carpets, but he might have to think twice before trotting her out in the future. According to report from Radar Online, Christina Sandera is concealing a secret criminal past – more specifically, a drinking problem and ‘domestic battery’.

Christina’s previous divorce papers show that she was involved in a difficult 11-month marriage with a local bakery shop owner, and even though the marriage ended more than ten years ago, the details are starting to come out now. Christina’s ex-husband, Paul Wainscoat, spoke to Radar, saying, “It was hell — I wish Clint all the luck in the world with that woman.”

One such report from the time that Paul and Christina were married – i.e., the ‘domestic battery’ incident – shows a brutal and ugly fight between the two, all beginning after Paul refused to move in with her. Apparently, to prevent him, Christina, “grabbed onto his shirt and scratched his neck to prevent him.”

Christina was arrested for domestic battery, but as we know from these cases, one reported incident doesn’t necessarily mean that it was the only time that this sort of thing happened. Plus, Paul accuses Christina of much crazier and much more unstable behavior in the divorce proceedings. In other words, Clint Eastwood has gone from famewhore wife [Dina Ruiz] to homewrecking girlfriend [Erica Tomlinson-Fisher], and is now with a violent and supposedly unstable woman. Man, being an Oscar-winning director certainly doesn’t account for good taste, does it?

What do you guys think? Is Clint Eastwood making a mistake by dating Christina Sandera? Or is he just having fun, consequences be damned? I don’t blame him – he’s finally reached a career high after many, MANY years with American Sniper’s success, and he’s just doing whatever he wants to do.