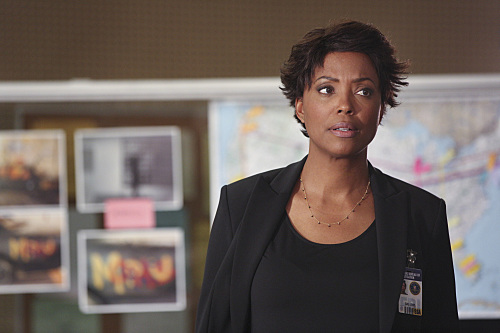 Tonight on CBS Criminal Minds continues with an all new Wednesday October 28, season 11 episode 5 called “The Night Watch,” and we have your weekly recap below. On tonight’s episode The BAU investigates when victims’ bodies are incorporated into macabre graffiti art in Detroit.

On the last episode, three restaurant workers were killed during a robbery in Las Vegas, N.M., and it prompted the BAU to reopen a cold case that occurred in the town six years earlier. Did you watch last week’s episode? If you missed it we have a full and detailed recap right here for you.

On tonight’s episode as per the CBS synopsis, “the BAU investigates when victims’ bodies are incorporated into macabre graffiti art in Detroit. The team suspects that a notorious street artist is responsible. Meanwhile, Dr. Lewis struggles to balance her relationship with her fiancé and her work.”

Dr. Lewis is finding it hard to separate her work life from her personal life. It seems she’s been working on a way to change the entire profiling protocol so lately she’s been interviewing a serial killer to get inside his head. And because the work is so important to her, she must have missed her fair share of dinners with the fiancé.

Subsequently Louis didn’t care to be in second place to anyone much less a serial killer so he told her one night that he was leaving and simply expected her to deal with the possible end of their engagement. And Lewis did take the news well. Maybe not at the time when she first heard but by the following morning she had told everyone that she had gone on a diet and lost over hundred pounds in a night.

So it was good that she back in a fighting mood because the BAU received another case. Russell Pearson had been murdered in a rare piece of art. The art itself was typical of a Morpheus character who had been doing graffiti art in and around Detroit for the past 6 weeks. Though Pearson appeared to be the first sign he had ever gotten violent.

Prior to the body of Pearson having been found, Morpheus was known to champion the underdog and issues that people rarely wanted to talk about. Yet Pearson had seemingly pressed a button of his. Pearson had publically fought the rejuvenation project that was a polite way to stop the rich from pushing out the poor but along the way Pearson changed sides. He had gotten arrested for taking bribes from the same people that he was supposed to be fighting against.

Thus there’s a reason why Morpheus would hate someone like Pearson but murder was still bit of a stretch. Morpheus had been like Banksy in the UK. He only took credit for his work by posting images of it on his website. Though he didn’t do that with Pearson so the team called in a rival artist for questioning.

Marcus had once torn down a Morpheus piece before it could be seen by anyone else. So the team wanted to question him in case he might have been forging Morpheus’s signature all over crime scenes. And to be frank, the team needed answers by time they spoke with Marcus. Morpheus had struck again only he didn’t kill anyone – he kidnapped a baby.

Corrine Wallace was 8 months old and her father was part of the rejuvenation project. So anything Marcus had to say could have been of help. Yet Marcus seemed to believe that the murder and the kidnapping were all part of Morpheus seeking attention. And thus he wasn’t forthcoming about how he was able to track Morpheus’s movements. He just said Morpheus had become predictable.

But what Marcus left out was that he did know how to find Morpheus and so that’s why he was probably killed.

Marcus was later found dangling in another art piece. The whole scene had been sent up to look like nursery though luckily the baby wasn’t there. Just Marcus and a Morpheus signature. However Reid took one look at the signature and knew it wasn’t the real Morpheus that had murdered Marcus.

And if that was the case then it was most likely he didn’t murder Pearson or kidnap a baby. So there was someone running around Detroit pretending to be Morpheus while they went on crime spree. And whoever the UnSub was, they were also intent on framing Morpheus had to be personal.

Plus if there had been any leftover doubt, it was put to rest when Morpheus contacted the BAU. Her speech identified her as a woman and the fact she had freaked out during their conversation must mean she knew who was setting her up. But she didn’t want to tell the BAU who they were looking for. Therefore they had to find out on their own that it was her ex that had been killing people in her name.

See, the team had been confused about a baby’s blanket. The real Morpheus had used her half in her artwork and the fake Morpheus had used his half in his mock piece. So Garcia looked into women who disappeared around the time Morpheus first popped up on the scene and she narrowed the search by looking women who had lost a child. And that’s how she found Ellyn.

Ellyn had a baby with her teacher at an art college and unfortunately their young boy died in a drowning accident. He was with his mother and took her eye off of him for a minute while she sketched. So the child’s father William blamed Ellyn. And when he saw she had used their son’s blanket for her artwork, he snapped.

He began framing her for murder thereby destroying her legacy in the art world and he killed Marcus and then a friend of hers in order to find out whereabouts. But once William had her, he was never going to let her live. So the BAU managed to rescue baby Corrine yet they couldn’t rescue Ellyn.

William chose to throw them both off the roof so that they died together.