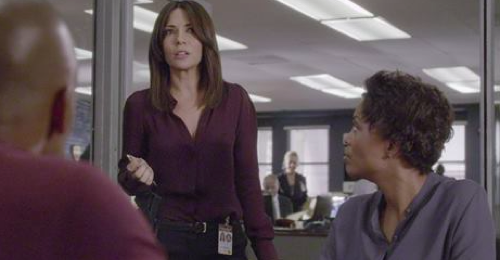 Tonight on CBS Criminal Minds starring Thomas Gibson and Shemar Moore continues with an all new Wednesday October 7, season 11 episode 2 called “The Witness,” and we have your weekly recap below. On tonight’s episode a Los Angeles bus is attacked with sarin gas and the BAU must quickly find the culprit before a larger scale incident occurs.

On the last episode, season 11 began with a search for a serial killer who leaves distinctive marked on victims’ faces. Meanwhile, a new team member, forensic psychologist Tara Lewis, assisted with the case. Did you watch last week’s episode? If you missed it we have a full and detailed recap right here for you.

On tonight’s episode as per the CBS synopsis, “when a Los Angeles bus is attacked with sarin gas, the BAU must act quickly to find the suspect before a larger-scale incident occurs.”

A chemical attack in LA has drawn the BAU’s notice. Unfortunately, ten were confirmed dead after someone released a poison gas attack on a public CityLink bus and so the feds are needed to determine if the attack was a one-off or if someone was just warming up for a big finale.

Though, sadly for them, the situation they walked into only deteriorated once the BAU’s plane touched down. The LAPD has vigorously been working the case since the incident and so they found out the gas that was used for the attack was actually Sarin gas. A highly dangerous and unstable chemical that isn’t exactly easy to find or use.

However, there was no known terrorist groups that were claiming responsibility for the attacks. And that normally would have been their first act upon completion. After all these groups do tend to live for the notoriety.

But that wasn’t the case this time. So the team had to move away from the usual suspects and start looking at individuals. In other words a lone terrorist. Someone possibly skilled with chemicals and was currently undergoing a great deal of stress. With that alleged stress going back over a month ago.

Reid and Rossi had taken a look at the crime scene for themselves and what they found was a fish-feeder. Apparently that was used to deliver the Sarin gas. It was set on a six-week delivering system and what that means is the Unsub planted it a while back. And then just waited, albeit callously, for the fall-out.

So the team were able to give a partial profile. They were looking for someone highly meticulous and of course patient. Most likely an older man who for all they know was using the CityLink bus as a test. And that theory of theirs started to pan out when they found the man that created the Sarin.

Johann Geiman was a chemist who until recently worked at one of those big city firms. That is until he was fired and then went on a social media rampage vowing revenge. But, while Geiman created the gas, he wasn’t the one that used it. He had sold his product and the man that killed him as covering his tracks.

And to fully those cover those tracks, a patsy was needed. Someone else that could take all the blame. So that’s how another man named Charlie Senarak somehow found himself caught in the middle of madman’s plan.

See, Charlie is beige. He’s been with the same company for fourteen years and has been married for thirteen of those years. Though other than his daughter who is seemingly the light of his life or his wife that had been cheating on him – there was not much else to Charlie. So it would surprise people if they ever found out that he killed his wife’s love and buried the other man’s body in the desert.

The lover, Theo, had refused to leave Charlie’s wife alone. He claimed he fell in love and it really looks like he gave up a lot for the married woman. Like his once close relationship with his brother, Mitchell. Mitchell and Theo were the ones that bought the Sarin gas from Geiman. It was their plan to create a terrorist attack. However, after Theo fell in love, he no longer wanted to be part of his older and manipulative brother’s schemes.

So Mitchell was following his brother around town, trying to pressure him, when he saw Charlie murder Theo. And once he had information on the other man, he used it to make Charlie do whatever he wanted.

Like breaking into Geiman’s home for instance after Geiman had just been murdered. All Charlie did was grab the computer like his blackmailer demanded but he didn’t know that Mitchell was secretly setting him up for the attacks. So when it did dawn on – it was already too late. Charlie looked guilty as possible for the murder of Geiman and Theo. Leaving no one left to go looking for the real culprit.

But that’s where Mitchell made the mistake. The BAU was a lot smarter than Mitchell gave them credit for. So they realized Charlie was conveniently used and carried out a city wide hunt for Mitchell.

And luckily they found him before he was able to set off a whole box full of fish-feeders.