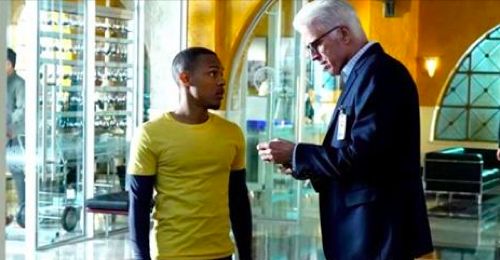 Tonight on CBS CSI: Cyber returns with an all new Sunday October 4, season 2 premiere called, “Why-F” and we have your weekly recap below. On tonight’s episode, season 2 begins with former Las Vegas CSI D.B. Russell (Ted Danson) joining the team as they investigate a burglary/homicide committed by someone who remotely hacked the victim’s home security system.

On the last episode, the cyber team investigated when a hacker used a power outage in Detroit to mask a jewelry store robbery-homicide in which gems weren’t the target. Did you watch the last episode? If you missed it, we have a full and detailed recap right here for you.

On tonight’s episode as per the CBS synopsis, “season 2 begins with former Las Vegas CSI D.B. Russell joining the team as they investigate a burglary/homicide committed by someone who remotely hacked the victim’s home security system. Meanwhile, Avery considers moving to a new position; Krumitz is a witness in his sister’s trial; Elijah deals with a delicate family situation; and further information is revealed about Nelson’s and Raven’s backgrounds.”

Tonight’s season 2 premiere episode looks like it is going to be great and you won’t want to miss it, so be sure to tune in for our live coverage of CBS’s CSI: Cyber at 10:00 PM EST! While you wait for our recap hit the comments and let us know how excited you are for the season 2 premiere.

Scott Barrett was away on vacation when his house was broken into on tonight’s episode of “CSI:Cyber”. And, while a B&E would normally have been passed off to someone else, Krumitz told his boss that it was a cyber-crime.

Krumitz found evidence of someone hacking into the Barrett’s home security network and the police had also mentioned that the alarm had never gone off during the break-in. So right away Avery realized that such a crime did fit the criteria for the cyber unit. Though there was a bit of confusion over why anyone would break in Barret’s home and only commit petty larceny.

Nothing big was moved and everything that was missing could easily be replaced. But D.B. who is both a friend of Avery’s and Director of the new division came with her to the house and he noticed something off. He clearly saw that someone had vacuumed inside of the house and he didn’t think it was the housekeeper.

So he performed a little experiment using the Roomba and he recreated the area that had been vacuumed. And that revealed a body had recently been on the floor. Meaning the team was no longer looking at a robbery. A murder had apparently happened as well.

As for Scott Barrett, he wasn’t a suspect. Instead the team believed he was a victim whose outlined they found back at the scene.

See Barrett was supposed to be on vacation but at the last minute he pushed back his plans. Krumitz had found a recent message from Barrett’s ex Ellen thanking him for postponing his trip in order to take care of their daughter. She had to do work thing in Australia and didn’t want to disrupt their daughter Rae’s routine. But there was one problem with finding Ellen’s message. Once there realized there was a girl, they also no one had seen the girl.

So there was moment of panic following that revelation. Though D.B. once again came in handy. He remembered a splatter of peanut butter left on the counter and that was just something a child would do if they were trying to make themselves a breakfast sandwich.

And it turns out, he was right. They later found Rae hiding in a cupboard. Her father had apparently told her to hide in there if she ever saw a stranger in the house. So that’s what she did and it wasn’t until Avery and DB convinced her that they were there to help – did the little girl finally give up her spot.

Thankfully, the six year old was fine. She hadn’t seen what happened to her dad and so she was quietly left in the dark until the mother returned to collect her.

But there was one thing that Rae said that put Avery on edge. The little girl had been talking about her doll and she mentioned that her doll had asked her to leave the backyard window open. It said that it wanted to play outside later. And after Rae repeated that last part, Avery looked into the doll.

The doll was created to send messages from the child to a server that it would then calculate the best response to say back to the child. However the doll operated over Wi-Fi and someone hacked into just to manipulate Rae. They wanted her to leave the window so that it would be easier to rob the place. Only something went wrong with the last house.

Seven other homes that operated on P-Tech had also been broken into. And, yes, these homes had easily manipulated children as well. But no one had showed up dead until Scott Barrett.

Yet, in the middle of this case, Krumitz got pulled away. He had been asked to testify as his Francine’s trial and so he had gone there expecting to vindicate his sister. Only, he hadn’t counted on her lying to him. So Krumitz was actually blindsided at the trial.

His sister hadn’t been stalked by their parents’ killer. In fact she was stalking him and the D.A even had proof. So Krumitz was left feeling betrayed. His sister was the only family he had left and in the end she abandoned him by making a selfish choice.

And sadly Elijah has some experience with what Krumitz is feeling. Elijah’s dad was recently diagnosed with cancer yet the older man doesn’t want to fight it. He’s wants to die and he’s simply forcing Elijah to go along with his choices.

But back to the case, they found their killer and to be frank it easy. Lonnie hadn’t been the brains of the operation. It was merely his job to break in and steal less than six hundred dollars from the home. However the man that hired him waiting to bring in the bigger bucks.

See, someone thought up one day that wouldn’t be easier to get P-Tech to pay him to fix the many faults in their systems if one day he showed them how easy it was to break into their systems. He could have stopped after two or three houses. But he went all the way up to seven in order to spread manic at the company.

And right when they were at their lowest, he was going to swoop like a hero.

Yet the real hero ended up being Nelson. Nelson found a way to trace their hacker because of the sound of his typing at his computer sent off vibrations his burner phone picked up. And using that information, they were then able to arrest their hacker right outside of his family home.

But it was weird. He had kids too and still didn’t think hacking into a child’s dolls was reprehensible.