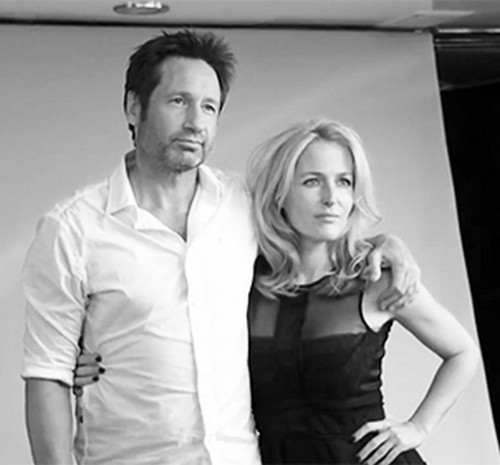 X-Files stars David Duchovny and Gillian Anderson still insist that they are not in a relationship – but everyone suspects the truth is quite different. David and Gillian have been linked together for years, despite the fact that Duchovny was technically married to Tea Leoni – however the stars of the wildly popular TV show still refuse to conform that they are dating. In the summer of 2015 Duchovny and Anderson will begin filming an X-Files reboot, which is rumored to be six episodes long – and the stars have been promoting the TV show and giving interviews on their big comeback.

David Duchovny recently sat down with NY Times and dished on the X-Files reboot, but fans of the TV show were shocked when he continued to deny his relationship with co-star Gillian Anderson. At this point it is almost downright disrespectful to fans to keep denying he and Gillian are together – when anyone with two eyes can see that is the case. David and his longtime wife Tea Leoni officially divorced in August 2014 after 17 years of marriage and Tea has already moved on with her Madam Secretary co-star. So, there is no logical reason for David to continue denying that he is in a relationship with Gillian Anderson. However, if the couple were ever to go public, then they would be confirming that David had cheated on his wife for many years (of course Tea cheated right back), so that may be the reason behind their hesitation.

In David’s interview with NY Times he was asked if he still stays in contact with Gillian Anderson and he blatantly lied and said, “Gillian and I have an email relationship. I maybe see her once or twice a year. Maybe if we do a convention — well, I’ve done one.” Ironically, multiple sources have seen Gillian and David together more than once or twice already in 2015 – and it is only March! Gillian has flown to Los Angeles or more than one occasion to see David, and he has been spotted in Toronto meeting up with her while she was filming Hannibal.

Are you as excited as we are for the X-Files reboot? Why do you think David Duchovny and Gillian Anderson refuse to confirm that they are in a relationship after all of these years? Are they just extremely private people, or is David hesitant to confirm he is with Gillian because that would mean confirming that he cheated on Tea Leoni for several years? Let us know what you think in the comments below!