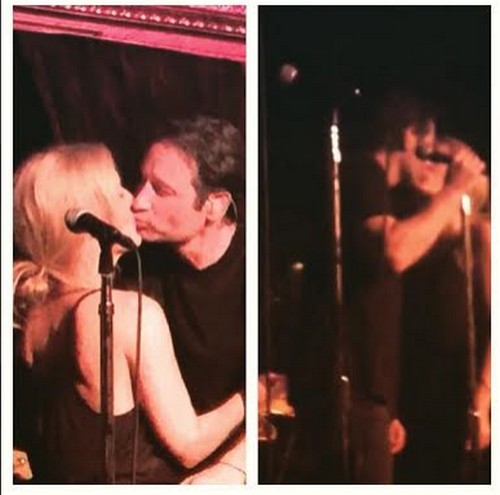 David Duchovny and Gillian Anderson kissed in public! David Duchovny and his X-Files co-star Gillian Anderson’s relationship has been Hollywood’s worst kept secret. But, on May 12 David and Gillian have finally confirmed what we have all known forever – they are definitely “more than just friends.” And not only did they go public – the two lovebirds actually kissed on stage in front of hundreds of people after singing a song together at David’s album release party.

On Tuesday May 12 David Duchovny’s debut album “Hell or Highwater” was released, and to mark the occasion David sang a 90 minute set in New York City at The Cutting Room. The crowd went wild when David’s co-star and rumored girlfriend Gillian Anderson joined him on stage. After singing Neil Young’s hit song “Helpless” together, David kissed Gillian Anderson on the lips before she left the stage – sending X-File fans into a frenzy on the Internet.

David Duchovny and Gillian Anderson have gone to ridiculously careful lengths over the years to hide their relationship, even after David and his longtime wife Tea Leoni divorced in 2014. Despite multiple rumors and supposed sightings of the couple together – David and Gillian have managed to ensure there was never any solid evidence or proof of their relationship. Ironically, they suddenly had a change of heart and participated in some PDA on stage in front of dozens of fans and cameras – just in time to promote the reboot of their wildly popular science fiction series X-Files, which they began filming. FOX announced in an official press release that the show will premiere on January 24 2016.

So, are you as shocked as we are that David Duchovny and Gillian Anderson would partake in such a public display of affection? Is it all just a publicity gimmick to promote the X-Files reboot that they are currently working on? Let us know what you think in the comments below!