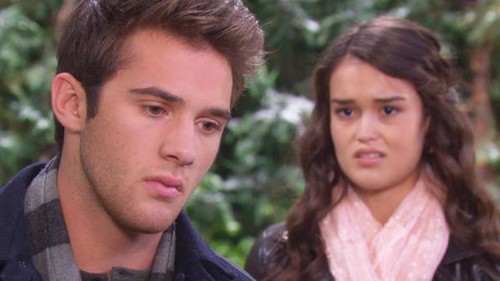 Days of Our Lives spoilers teased an unexpected hookup in Salem a few months ago, but the to be spicy pairing of Eve and JJ did not resonate well with DOOL fans – as a matter of fact 99% of viewers were completely grossed out when Eve slept with her daughter Paige’s [True O’Brien] boyfriend. Apparently, JJ wasn’t that thwarted by the event though, because he went back for round two. So far, Eve and JJ have managed to keep their affair under wraps. But, according to new Days of Our Lives spoilers – all that is about to change.

Days of Our Lives spoilers for January 2015 tease that Paige is not satisfied with JJ’s half confession and is determined to find out which sultry Salemite bedded her boyfriend. According to DOOL spoilers, JJ’s ex puts on her Nancy Drew hat and begins searching for clues as to the identity of the woman that JJ cheated on her with, and we hope for her sake she doesn’t figure it out.

Meanwhile, spoilers for the NBC soap reveal that JJ’s guilt is eating him up inside and since he can’t confess to Paige that he slept with her mother, he decides to unload his baggage on his own mother Jennifer Horton. Jennifer and Eve have a long sordid history of rivalry, and there is no way Jennifer isn’t going to march over to Eve’s house and confront her about sleeping with JJ and simultaneously destroying his relationship with Paige. Once the cat is out of the bag and Jennifer and Eve go to war, it will only be a matter of time before Paige figures out that her boyfriend cheated on her with her mom.

Days of Our Lives rumors have been floating around for a few months now teasing that Paige was exiting the NBC soap. If there is any truth to the casting rumors about True O’Brien’s exit, then it makes sense that she leaves Salem and doesn’t look back when she learns what her mother Eve did.

So Days fans, how do you think Jennifer will react when she learns that JJ slept with her nemesis Eve Donovan? Will the truth about Eve and JJ’s affair be enough to drive Paige out of Salem for good? Will you miss True O’Brien? Let us know what you think in the comments below and don’t forget to check CDL tomorrow for more Days of Our Lives spoilers and news.