Days Of Our Lives Spoilers: Bo Brady Recast – Theresa Hooks Up With Rafe – Chad Breaks Up Melanie And Brady? 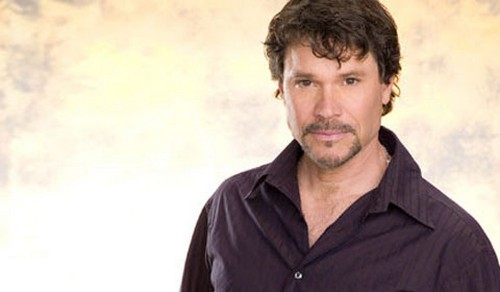 Kristen DiMera Drops Two Bombs: Days of Our Lives coming and going spoilers have confirmed that Kristen DiMera will be back in Salem sometime in February 2015 – and rumor has it that when she arrives she will drop not one, but two bombs on the unsuspecting residents of Salem. Obviously, the first bomb will involve the babies she stole from Theresa Donovan. However, rumor has it that Kristen will also reveal that her brother, EJ DiMera, is still alive – and pave the way for a James Scott replacement.

Aiden’s Wife: Days of Our Lives spoilers have been hinting for months now that Aiden may have killed his wife so that he could inherit her family fortune. Rumor has it that Aiden’s dead wife isn’t really dead though. DOOL coming and goings recently confirmed that a new character named Meredith is set to arrive in Salem in February 2015 – and rumor has it she is Aiden’s not-so-dead wife and she may have faked her death!

Chad & Melanie: Chad Dimera is currently in a relationship with Jordan and spoilers tease that Melanie Jonas and Brady are finally getting back together. But rumor has it that the Chad and Melanie saga is far from over and she and Brady’s relationship could end before it really gets started. A popular DOOL fan theory is that Kristen DiMera will convince her little brother, Chad, to pursue his ex-girlfriend and cause a rift between her and Brady.

Bo Brady Recast: There has been a lot of buzz about Bo Brady returning to Salem, but Peter Reckell has been stirring up some major drama on social media about possibly returning. Rumor has it that TPTB are very interested in bringing back Bo to stir up some drama between Hope and Aiden – but they are searching for a recast and Peter Reckell is out of the question after his bizarre rants about the NBC soap on Twitter.

Theresa And Rafe: This is probably the most bizarre pairing ever, but rumor has it that Theresa Donovan and Rafe both find themselves at rock bottom in 2015 and wind up leaning on each other for support and their new found friendship will blossom in to something romantic. Considering the fact that Rafe is no longer a member of the Salem police Department – we could definitely see him spiraling downhill and Theresa loves scooping up men while they are at rock bottom.

So Days fans, what are your theories about Aiden’s wife? Is she really dead – did he try to kill her or is he just guilty of helping her fake her death? Do you think that after Jordan exits Chad could come between Melanie and Brady? How do you feel about Theresa and Rafe hooking up? Would you like to see Bo Brady return? Let us know what you think in the comments below and don’t forget to check CDL tomorrow for more Days of Our Lives rumors and spoilers.