Days of Our Lives Spoilers: Will and Paul Cheat on Sonny – Serena Freaks Out on Nicole – Melanie and Brady Discuss Feelings 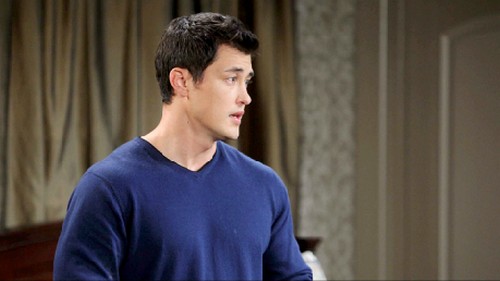 Days of Our Lives spoilers and sneak peek video for the week of January 5-9 tease some exciting and drama packed episodes for fans of the NBC soap, and rumor has it DOOL viewers will not want to miss a single second. There is never a dull moment in the town of Salem, but according to Days of Our Lives spoilers the week of January 5 will be extra eventful.

Monday January 5: Days of Our Lives spoilers tease that on Monday January 5 sparks will fly between Eric’s new flame Serena Mason, and his ex-girlfriend Nicole. Apparently Serena is not happy that Nicole has been playing Nancy Drew and trying to dig up dirt on her, and DOOL spoilers reveal that the red-head goes up one side of Nicole and down the other for snooping around her hotel room.

Tuesday January 6: DOOL fans can expect another heated war of words on January 6, Days of Our Lives spoilers reveal that Rafe has a few choice words for Chad DiMera. Rafe’s portrayed Galen Gerring informed Soap Opera Digest that, “Rafe knows Chad can’t be trusted, he has picked up some bad habits from his father.”

Wednesday January 7: Days of Our Lives spoilers reveal that on Wednesday’s episode of the NBC soap Brady and Melanie will have a long overdue conversation for their feelings for each other, and whether or not they are going to remain friends or take their relationship to the next level. Meanwhile across town, Theresa Donovan begins to realize that something is not right when she picks up a baby rattle and becomes emotional. Rumor has it that it is only a matter of time before Theresa realizes Kristen DiMera stole her baby out of her womb.

Thursday January 8: On Thursday’s episode of Days of Our Lives, the latest edition of Soap Opera Digest teases that, “Melanie finds Theresa in a vulnerable moment.” DOOL spoilers tease that Melanie Jonas decides to “keep her enemies closer” and gets close to Theresa to make sure that her new nemesis stays as far away from Brady Black as possible. Also, Adrienne and Lucas continue to grow closer and Adrienne reveals that her hubby Justin has been cheating on her.

Friday January 9: Days of Our Lives spoilers tease that on January 9 all hell breaks loose in Sonny and Will’s marriage when Sonny heads to his old flame Paul Norita’s hotel room…and finds Will inside with the athlete!

So Days fans, how do you feel about Melanie and Brady hooking up? Do you think Theresa will realize that she really was pregnant? If Rafe and Chad go to war, who do you think will come out on top? Is this the end of Will and Sonny? Let us know what you think in the comments below and don’t forget to check CDL tomorrow for more Days of Our Lives spoilers and news.

I’m sorry but he looks like Hermie the elf on Rudolph to me, making him hard for me to watch as well. Next thing you know he’ll want to be a dentist.

I still miss the old Will.

I meant to say Sonny and I agree. This Will is nothing like the old Will. I really can’t even watch him on the screen.

Good riddence to Will. Soon deserves so much better then him and his selfishness

I think Brady and Melanie would be a super couple in no time. Who better to deal with Kristin, and Theresa. Will is acting out of character…he is the last person to cheat.he lived with Sami Brady…. He saw first hand the damage that would do. he would not do that. Poor writing, little understanding of the characters history.