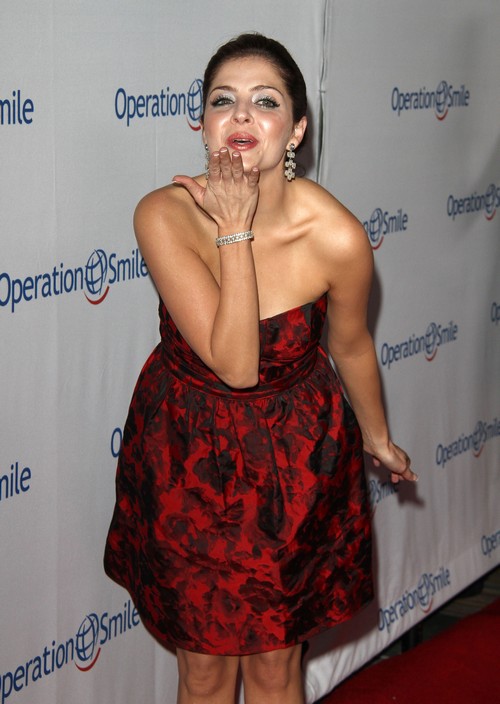 Days of Our Lives rumors reveal that Theresa Donovan may be leaving the NBC soap! Days of Our Lives news and spoilers revealed over the holidays that cast members Jen Lilley (Theresa Donovan) and Eric Martsolf (Brady Black) were releasing a Christmas song titled “Baby It’s Cold Outside.” This isn’t the first time soap stars have tried their hands at a singing career, and it probably won’t be the last – however, Martsolf and Lilley aren’t your typical soap musicians, they can actually sing! When the single was released, DOOL fans were impressed with the Days of Our Lives’ stars musical talents, and apparently they weren’t the only ones.

According to new Days of Our Lives reports, Capitol Records was so impressed with Jen Lilley’ Christmas duet with her DOOL co-star that they have offered to produce two full albums for the soap actress. Lilley confirmed the news in an interview with Soap Central, and when asked if she planned to leave the NBC soap and pursue music as a full time career, she didn’t exactly say “no.” Jen’s wishy-washy response has fueled a surge of rumors that the actress may be quitting the NBC soap and the writers could be currently planning a Theresa Donovan exit.

When asked in the interview about her future at Days of Our Lives the actress responded, “I’ve thought about that a lot. It’s hard to say, but I definitely don’t think I could go on without acting. I really enjoy the art of storytelling, and I think singing is storytelling too, but I will always want to act more than I want to sing — I think. Because they asked me that, too. They said, ‘You could quit right now and become a full-on recording artist.’ And I was like, ‘Yeah, I don’t think that’s what I want to do.’ I want to do both, and I think you can do both. People do it. But… if it was like an option of going on tour musically, or doing a movie, I’d rather do a movie, I think. Ask me again in a couple of years!”

As of right now, Days of Our Lives spoilers tease that in 2015 Theresa Donovan has a major storyline coming up with Kristen DiMera (Eileen Davidson), and Theresa is beginning to realize that she may have really been pregnant and something strange may have happened. However, Days of Our Lives is the only soap opera that films its scenes nearly six months in advance, so there is a very good chance the writers could already be setting up Theresa Donovan’s exit – and we won’t even know about it for several months! What do you think Days fans? Did you listen to Jen Lilley’s Christmas song? Will she quit the NBC soap to become a singer? Let us know what you think in the comments below and don’t forget to check CDL tomorrow for more Days of Our Lives spoilers and news.

Update: Jen Lilley has come out on Twitter and responded to CDL’s article and said she is not leaving leaving B&B and is filming a movie in February in Boston. 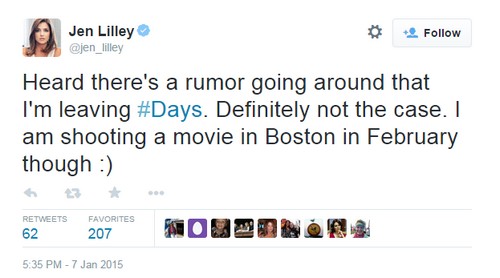