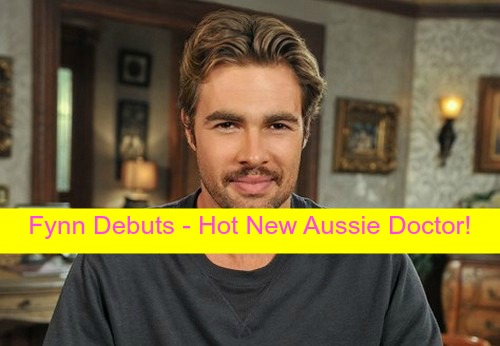 “Days of Our Lives” spoilers (DOOL) reveal that there will soon be a new doctor in town. You might remember hearing about a competition for the role of an Australian hunk on the NBC soap. Foxtel’s star search started out with 300 contestants, but it was quickly narrowed down to three.

Eventually, an Aussie actor and former model named Alexander Bruszt won the part. The 32-year-old heartthrob immediately began filming and his first airdate is rapidly approaching. Bruszt is set to debut as Fynn during the week of November 9-13 on “Days of Our Lives.”

Fynn happens to be an old friend of Daniel’s (Shawn Christian) and he’ll be completing his residency at the hospital in Salem. It looks like Nicole (Arianne Zucker) will bump into the charming doc as he gets settled in. In an interview with News.com.au, Bruszt opened up about what “Days” fans can expect from Fynn.

Bruszt noted that Fynn’s “a good doctor and looks after everyone,” but he was didn’t want to give any major plot details away. “I can’t say much about how he affects the storylines, but he’s winding his way through Salem and there’s a fair bit of mystery about this guy,” said Bruszt. “There’s something brewing and he might end up coming out with something people didn’t expect.”

Hmm…that’s an intriguing statement that could have many meanings. However, the comment has prompted some rumors that Fynn could come out as gay or bisexual down the road.

It’s also worth noting that Fynn hasn’t been paired up with anyone just yet. According to Bruszt, it’s all about finding the right fit. “They’re trying to see what my chemistry is with other people,” Bruszt suggested. “They are testing me with everyone at the moment.”

Since Bruszt said people rather than women, it’s possible that he wasn’t exaggerating when he stated he was testing with everyone. Perhaps Fynn could serve as a love interest for Paul (Christopher Sean) since Will (Guy Wilson) is dead and Sonny (Freddie Smith) recently headed back to Europe. Of course, Fynn could always pick from one of the ladies if he’s bisexual or straight.

Whatever the case, it seems DOOL writers have plenty of time to figure it out. While Bruszt originally signed on for a three-month stint, the producers must have liked what they saw. Bruszt extended his contract for another cycle and he’ll have a chance to explore whatever storylines are in the works. Stick with “Days of Our Lives” for updates on Fynn and the surprises he might have in store.

So “Days” fans, what do you think about the news that Alexander Bruszt will debut as Fynn soon? Do you believe Fynn will be a good addition to the DOOL cast? Voice your opinion in the comments below and don’t forget to check CDL often for the latest “Days of Our Lives” spoilers, rumors, updates and news.