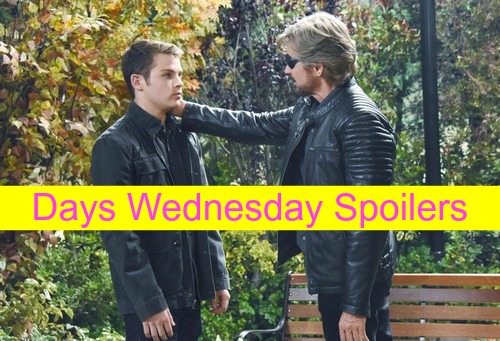 “Days of Our Lives” spoilers for Wednesday, November 11, tease that Bo (Peter Reckell) will open up to Hope (Kristian Alfonso) about where he’s been over the past few years. Hope will be stunned when she realizes that Bo was held in captivity.

Once the shock wears off, Hope will begin to feel guilty for doubting Bo. Jennifer (Melissa Reeves) will try to reach out to her later this week, but there’s really no quick fix for Hope’s problems.

Meanwhile, Steve (Stephen Nichols) and Kayla (Mary Beth Evans) will try to tackle a problem of their own. DOOL viewers know that an old threat has resurfaced and Steve is concerned about what the future holds for his family.

“Days of Our Lives” spoilers say Kayla will insist that they can handle this if they stick together. Joey (James Lastovic) will certainly be pleased when his parents start to grow closer.

Across town, John (Drake Hogestyn) will get updates from the ISA. After John suddenly backed out of his recent assignment, someone informed him that the ISA didn’t appreciate it. It looks like danger could be lurking for John if he’s not careful. Marlena (Deidre Hall) would be thrilled if the ISA just kicked John out, but that’s probably a bit too easy. Whatever happens, you can bet there’s trouble ahead.

Other “Days” spoilers reveal that Chad (Billy Flynn) and Abigail (Kate Mansi) will have an interesting conversation on the phone. Ben (Robert Scott Wilson) will want Abigail to prove she doesn’t love Chad by telling him it’s over and ordering him to stay out of her life.

However, Chad’s instincts will tell him something’s off. Abigail and Chad will work out a code that lets him know he needs to intervene. DOOL rumors hint that Chad may show up at the cabin just in time to deliver Abigail’s baby. Stick with “Days of Our Lives” to see if Chad’s rescue mission will be successful.

So “Days” fans, what do you think about the news that Bo will give Hope an explanation for his absence? Will Steve and Kayla be able to remain in control of their situation? What’s up with John and the ISA? Will Chad save Abigail and her child? Let us know what you think in the comments below and don’t forget to check CDL often for the latest “Days of Our Lives” spoilers, rumors, updates and news.