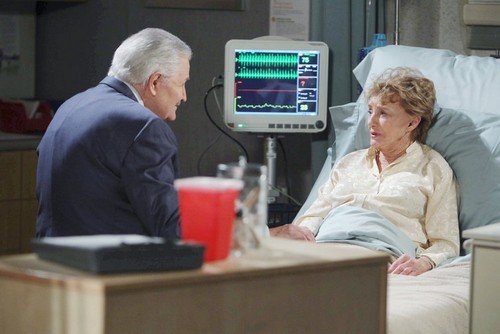 This is the Days of Our Lives spoilers weekly wrap up, commentary and look into the DOOL future for the week of August 17 – August 21. The residents of Salem had an action packed week in their town. Brady Black (Eric Mastoff) had another showdown with his son’s mother Theresa Donovan (Jenn Lilly). This time it was about her using a false broken leg to gain his sympathy and try to get him to care about her. This is just the latest in Theresa’s schemes to try and get Brady to love her and unite the three of them as a family.

Then Brady had a conversation with his step-grandmother and AA sponsor Maggie Kiriakis (Suzanne Rogers) who sympathized with him but told him that he was going to have make some tough choices when it came to the mother of his child. This storyline was a bit of a miss. One of the biggest reasons was due to the wardrobe miscue. It is summertime in Salem and they had Brady in a long sleeve gray pullover that he wore for four days straight. Even when he left the house to go visit Nicole (Arianne Zucker) and Daniel (Shawn Christian). They changed the days and changed Theresa’s clothing but forgot all about Brady.

Abigail Deveraux (Kate Mansi) had a busy week as well. She got the results of the paternity test to determine whether the father of the baby she is carrying was Chad DiMera (Billy Flynn) or her boyfriend Ben Weston (Robert Scott Wilson). Abigail’s aunt Kayla Brady (Mary Beth Evans) ran the test in secret using only Chad’s DNA that they had on file at the hospital. Just before Abby opens the test results there is a phone call to Kayla’s office from one of the lab techs stating that there was a mistake with the test and that they need to rerun the test so they need to not look at the results and destroy them instead.

This Days of Our Lives storyline is a miss on many levels. First of all they are comparing old DNA and as we have seen it could be anyone’s DNA. Second of all why would they destroy the first set of results without opening them? Kayla took every precaution to make sure that the test was done safely and if no one knew who it was for and what it was about then why couldn’t the results simply be thrown away? 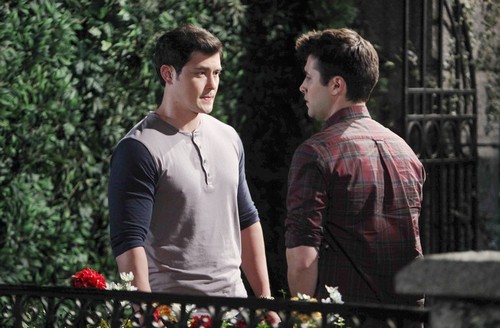 In other Days action this week Paul Norita (Christopher Sean) found out some information this week that put him at odds with Will Horton (Guy Wilson) once again. Will gave information to Derek (Spencer Neville) that was private to help him make inroads with Paul and keep Paul away from Will’s husband Sonny (Freddie Smith). When Paul found out he became angry and confronted Will about his duplicitous behavior. Word is that Guy Wilson is done at DOOL.

This DOOL storyline works because it continues to lead towards Sonny’s exit and we are still not sure how it is going to happen. Is Sonny going to be killed off? Will he simply get fed up and leave town due to Will’s foolishness? It is leaving us with a bit of intrigue even though we know the end result because there is still no idea how it will be achieved.

Nicole (Arianne Zucker) and Xander (Peter Telfer) had an uncomfortable encounter this week in the park while she waited for Daniel. Xander threatened Nicole and told her that she was going to live a miserable life and that he could not wait to see her suffer and when he grabbed her arm and threatened her Daniel stepped up and told him to stay away from her.

This confrontation is proof of Xander’s descent into madness. Although he has been warned to stay away from Eric, Daniel and Nicole he just seems to be drawn to them like a moth to a flame. It lends a believability to the story that he is some kind of deranged stalker and it also makes fans curious to know what made him that way.

This is also a great way to tell Nicole and Daniel’s love story. Seeing her being protected and loved for who she is despite her mistakes is wonderful and it is something this character has never so their storyline is definitely a hit.

In other Salem news Eric Brady (Greg Vaughn) and Serena Mason (Melissa Archer) had a heart to heart after Serena helped to save the life of Eric’s beloved grandmother Caroline (Peggy McCoy). Caroline had a stroke while she was in the park and it was thanks to Serena’s quick thinking that she made it to the hospital in time. Eric told Serena that he appreciated her for saving his grandmother. He also told her that he forgave her; and while they would never be friends they were no longer mortal enemies. Eric let Serena know that he wanted her to stay in town and finish her research. This is actually a good way to end this storyline. Serena is leaving the show soon so having her do something to make peace with the people she hurt and sending her out of town on a positive note is a good thing. This also provides some peace for Eric as well because he was pretty tormented about what happened in Africa so this way both characters are able to obtain the peace they need to move on with their lives.

What do you think CDL’ers was Days of Our Lives a hit or a miss this week for you? Come back later as we will have lots of Days of Our Lives spoilers and news for you right here – there are cast changes and new storylines so be sure to read about them in a timely manner! Please leave your thoughts and comments in the CDL comments below.