‘Days of Our Lives’ Spoilers: Could Paige and Ben Hook Up – New Character Cast Named Lani Is Chad’s Ex 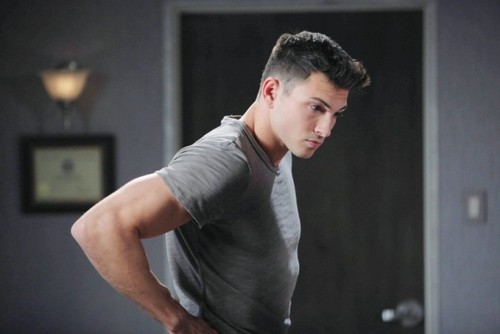 “Days of Our Lives” spoilers tease that Abigail (Kate Mansi) will stop fighting her attraction to Chad (Billy Flynn). Of course, that means Ben (Robert Scott Wilson) could end up heartbroken and alone. The latest DOOL rumors are hinting that Ben may find himself drawn to another Salemite who’s faced a lot of heartbreak lately. Paige (True O’Brien) recently learned that JJ (Casey Moss) slept with Eve (Kassie DePaiva) and it’s causing a downward spiral. Likewise, Ben will surely be in a dark place when he learns that Abigail is ditching him in favor of Chad. Perhaps the pair could bond through their shared experience with betrayal.

“Days” spoilers reveal that Paige will feel jaded and ready for a change. Ben will also have a new perspective in the near future. DOOL viewers know that Ben recently took Clyde’s (James Read) last name and he’s looking for a fresh start. However, Ben may regret getting too close to his father. Between Will’s (Guy Wilson) article and Hope’s (Kristian Alfonso) investigation, the dirty details of Clyde’s ruthlessness should come to light soon enough.

If Ben finds out that Clyde is still bad news, his anger could make him follow a similar path. It definitely doesn’t sound like Ben will learn from Clyde’s mistakes. “Days of Our Lives” spoilers say we’ll begin to see Ben’s wild side in the coming months. Now that Paige is trying to be Salem’s resident bad girl, maybe she’d be willing to hook up with rough-around-the-edges Ben. After all, they knew each other back when Ben was calling himself Kevin and working as a waiter in Florida. Ben and Paige have been fairly dull characters up to now. This would be a great opportunity to inject a little life into their storylines.

On the other hand, there are other ways to shake things up, at least for Ben. A recent casting call went out for an African-American actress to play the part of Lani. An audition video has surfaced online and the dialogue clearly points to Lani as Chad’s ex, presumably from Boston. The rumors say Lani may be involved with the police force in Salem. It’s possible that Lani could fall for Chad again, but it’ll take a while for that to happen. Lani will be pretty ticked that Chad left town without any explanation. That might mean Lani will want someone new and Ben could be the perfect fit. Will Ben find a hot hookup to rub in Abigail’s face? Stick with “Days of Our Lives” to see what updates are coming to Ben’s love life.

So “Days” fans, what do you think about the possible pairing of Ben and Paige? Is it just crazy enough to work? Who will Lani be paired with? Could Lani get revenge by showing Chad she’s moved on with Ben? Let us know what you think in the comments below and don’t forget to check CDL tomorrow for the latest “Days of Our Lives” spoilers, rumors, updates and news.