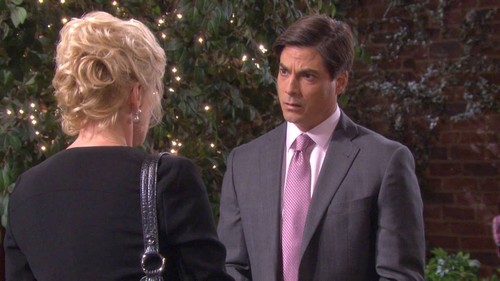 “Days of Our Lives” spoilers for Thursday, April 2, tease that several Salemites will find themselves facing temptation. DOOL fans know that Paul (Christopher Sean) still has feelings for Sonny (Freddie Smith), but he’s been doing his best to stay in control of his emotions. Likewise, Sonny admitted that Will (Guy Wilson) might be right about him not being over Paul. “Days of Our Lives” spoilers hint that Paul and Sonny will share a sexually-charged moment. Since there’s a charity benefit/anniversary party that they’ll need to get back to, it doesn’t sound like the pair will go all the way. Still, it’s clear that there’s a spark between them. The rumors say Paul and Sonny will continue to grow closer in the coming weeks. Stick with “Days” to see if Sonny will be able to resist his attraction to Paul.

Meanwhile, Lucas (Bryan Dattilo) and Adrienne (Judi Evans) will deal with some sexual tension of their own. Adrienne and Lucas clashed over their sons earlier in the week, but their fight didn’t last long. It seems one thing will lead to another and they’ll end up in bed together. However, Adrienne is still feeling hurt and abandoned since Justin (Wally Kurth) confessed to cheating and headed back to Dubai. Once Lucas and Adrienne do the deed, they’ll have to figure out what’s next for their relationship. Even though Justin has treated Adrienne poorly, she’ll likely feel some guilt for breaking her marriage vows. After all, two wrongs don’t make a right. On the other hand, things seem to be moving very quickly with Lucas. Maybe Adrienne will just decide to follow her heart. Stay tuned to DOOL to watch Lucas and Adrienne move forward.

Other “Days of Our Lives” spoilers indicate that Ben (Robert Scott Wilson) and Abigail (Kate Mansi) will reconcile. The couple hit recently hit a rough patch thanks to Ben’s insensitivity, but it looks like they’ll put their little tiff behind them. When Chad (Billy Flynn) learns that Ben and Abby are no longer on the outs, he may find himself feeling a little jealous. Chad has been giving Stefano (Joseph Mascolo) updates on his plan to manipulate Abigail, but it’s possible that he still cares for her on some level. Keep watching the NBC soap to discover what Chad’s true motives are.

So “Days” fans, what do you think about the news that Paul and Sonny will be tempted? Do you think they’ll end up sleeping together eventually? What about Lucas and Adrienne’s romp in the sheets? Is it too soon for Adrienne to move on? Do you approve of the love triangle that seems to be forming with Ben, Abigail and Chad? Let us know what you think in the comments below and don’t forget to check CDL tomorrow for the latest “Days of Our Lives” spoilers, rumors, casting updates and news.