Demi Moore Steals Rumer Willis’ Spotlight During ‘Dancing With The Stars’ Premiere – Trying To Hook Up With Val Chmerkovskiy? 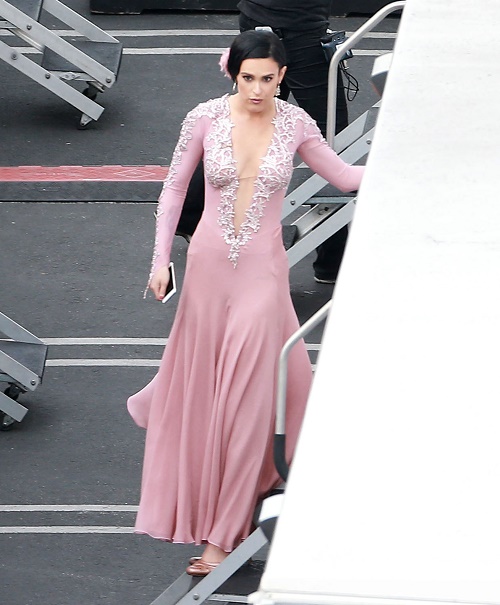 Is Rumer Willis’s mom, Demi Moore, trying to steal her Dancing With The Stars partner Val Chmerkovskiy? Demi Moore may be 52 years old, but her daughter Rumer Willis knows all too well that her mother is still a cougar at heart. After Demi’s infamous relationship with Ashton Kutcher (15 years younger than her), Demi moved on to Rumer’s friend Sean Friday – who is literally half her age. Rumer’s complicated relationship with her mother Demi over the years has given tabloids and the media a lifetime supply of ammunition. Who doesn’t love reading about a 52 year old woman who dates guys her daughter likes and is constantly trying to steal her spotlight?

When it was announced that Rumer Willis had been selected to appear on Season 20 of Dancing With The Stars – we all knew that her mother Demi would cash in on the opportunity to be in front of the cameras again. But Demi took it to a whole new level that even we didn’t expect. According to GLOBE Magazine, Demi Moore has been crashing Rumer and Val’s dance rehearsals and completely embarrassing herself and her daughter by flirting shamelessly with the DWTS Casanova. Considering Val’s track record, we’re sure he didn’t exactly not encourage it.

The season premiere of Dancing With The Stars debuted on Monday, March 16th, and as predicted Demi Moore showed up to cheer her daughter on from the audience, and smile for the cameras. According to DWTS insiders, Rumer is livid that her mother is not only trying to steal her dancing partner, but also trying to steal her spotlight on the ABC dancing competition. We totally get that Rumer wanted Dancing With The Stars to be “her thing” – but if it weren’t for the fact that Demi was her mother she shouldn’t even be on the show to begin with. To be completely honest, the Dancing With The Stars producers probably chose Rumer just because they knew Demi would show up to every performance and stir up drama – just like she has been doing.

Do you think that Rumer is being over-dramatic about her mother showing up at the Dancing With The Stars premiere? Would Val Chmerkovskiy actually hook up with Demi Moore, or is it all just innocent flirting? Did you see Rumer and Val’s dance – do they have a shot at winning this season? Let us know what you think in the comments below!