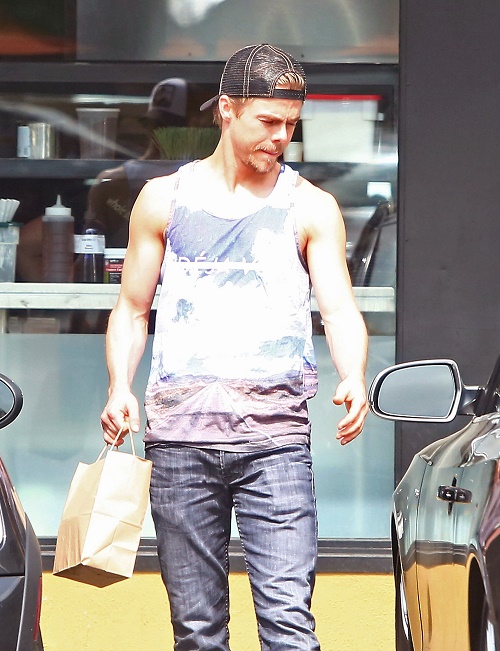 One day, when I’m all grown up like a sandcastle in Gary Busey’s garden, I want to be Derek Hough and Julianne Hough. The poster children for dancing, happiness and all that jazz (insert ‘Chicago’ reference here) discarded The Shining’s elevator dresses and got engaged – well, only Julianne got engaged, but they’re like Tweedle-Sister and Tweedle-Brother so one for all and all for one.

According to Us Weekly, Julianne’s post-Ryan Seacrest beau, NHL player Brooks Laich, popped the question with a customized “Lorraine Schwartz-designed oval-cut diamond ring that’s more than six carats”. Julianne said, “Yes, yes, yes!” Obviously. Who says no to Lorraine Schwartz – pardon, I meant who says no to an NHL player? Hockey and blonde women go together like Piper Chapman and Alex Vause.

Brother Derek described the moment as “magical.” Coffee is magical. Uri Geller’s fake spoons are magical. Magical, schmagical. Jaded lovers beware: it gets worse. “[I’m] so excited,” Derek told the Insider at the 2015 Industry Dance Awards. “We actually spent the week at the lake house and all the family was there, the kids, nieces and nephews. And we spent the most magical, amazing week together and then at the very end [they] got engaged. He’s a great guy, I just couldn’t be happier for them.”

Is Derek Hough a character in Hocus Pocus? He’s worse than a teenage witch named Sabrina. It’s so bloody magical! If he could click his red heels and fly away to the Land of Oz (not Australia), perhaps then Julianne might enjoy her “magical” moment without being subjected to her brother’s adjectives.

According to an exclusive insider for Celeb Dirty Laundry, “Julianne and Brooks make for the perfect couple. He’s a traditional gentleman; he asked her dad, Bruce, for her hand in marriage. Now that’s what I call a ‘good guy’.”
(I imagine Teresa Giudice said the same about her husband, Joe Giudice).

Our source concludes, “The Hough family couldn’t be happier about Julianne’s engagement. They never liked Ryan [Seacrest] to be honest. It is what it is.”

What do you think about Julianne’s engagement to Brooks? Will they have a fairy tale ending? Or will the Gary Busey Relationship Demon rear its ugly head before they head down the magical aisle? Let us know your thoughts in the comments below.