Julianne Hough Engaged To NHL Player Brooks Laich: Dancing With The Stars Judge Still A Virgin, Saves Herself For Honeymoon 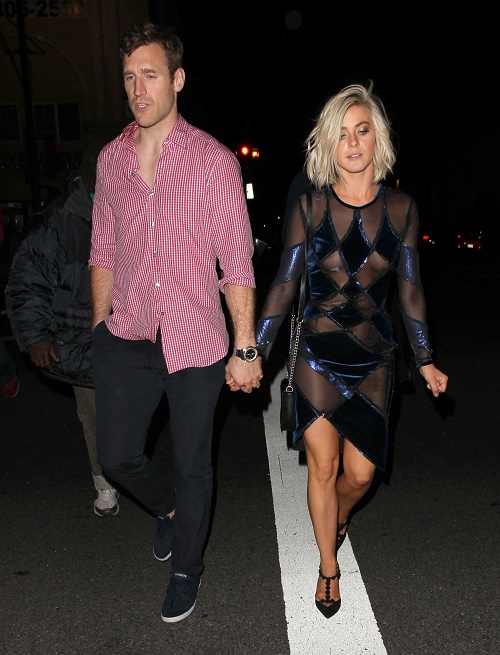 Julianne Hough is getting married! The former Dancing With The Stars dancer turned judge is officially engaged to boyfriend Brooks Laich. Laich is a pro hockey player, and has been in the NHL since 2004, he currently plays for Washington’s Capitals. Hough announced her engagement via Instagram and shared a photo of herself and her new fiancée. The DWTS judge captioned the photo, “We are overwhelmed with joy and excitement to share with you our recent engagement! #fiance #love”

Julianne Hough is relatively private when it comes to her love life. Although she lives her life in the spotlight, she somehow miraculously manages to keep her relationships pretty low key. Brooks on the other hand has no qualms about sharing the details of their relationship to any one who will listen. In an interview he recently raved, “She’s a cool, cool gal. She’s just a sweetheart, very loving, very giving. She puts so much great out into the world. I’m a pretty lucky guy.”

Julianne Hough has prided herself on being a virgin, and waiting until she is married to have sex – which might be why her last engagement to fellow dancer Zach Wilson didn’t work out (they broke up in 2007). Since then, Julianne Hough famously dated American Idol host Ryan Seacrest – although word on the internet is that the reason their relationship lasted so long was because Hough was just his beard, and Ryan had no interest in having sex with her or any other woman for that matter.

As of right now, Julianne Hough still maintains that she is a virgin, which means that theoretically she and Brooks have never “done the deed.” So, the NHL player will most likely be rushing to get her down the aisle and off on a honeymoon. On the bright side, Julianne and Brooks will have some super athletic babies.

Do you think that Brooks and Julianne are the real deal, will they wind up getting married? Let us know what you think in the comments below!