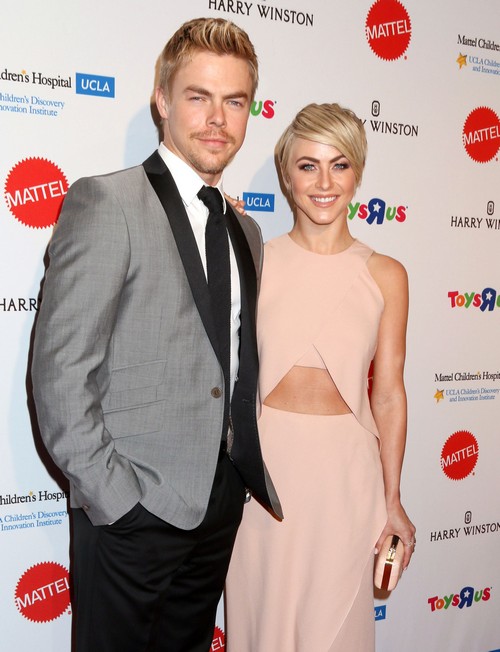 Dancing With The Stars season 19 spoilers reveal that there is some major drama going down behind the scenes of the current season. Right before Season 19 of DWTS kicked off, ABC announced that alum Julianne Hough would be returning the dancing competition, but not as a dancer, as a judge! But, it turns out that some of Julianne’s old co-stars aren’t exactly thrilled about her promotion, although her brother Derek is probably loving the advantage he now has over the other pro dancers.

The September 29th edition of Star Magazine reveals that Julianne Hough and her ex BFF Karina Smirnoff are waging an epic battle behind the scenes of DWTS Season 19. Star reveals that Karina is not happy with Julianne Hough on the judges’ panel and thinks that it gives Hough’s brother Derek an unfair advantage over the other competitors. In a public statement Karina scoffed, “Do I think it’s fair? No. But it’s a TV show,” when she was asked if Julianne on the judge’s panel was unethical.

Karina’s very public stance on the matter has Julianne furious. Star’s inside source explains, “Julianne says she needs the work. Her whole job on the panel could unravel very quickly, because now viewers are going to be extra skeptical. If Julianne high-scores her brother, it’s nepotism. And, if she low-balls Karina, it’s revenge.”

Karina isn’t the first person to question how fair it is that Julianne is judging her own brother, (remember the disgusting Mark Ballas scandal last year?) and she probably won’t be last, the controversy is bound to heat up once this season of DWTS gets down to the final teams. Even if Julianne doesn’t favor her brother and scores him fairly, there are going to be some disgruntled fans who’s favorite team goes home, that complain that it is Julianne’s fault. The whole feud seems silly, Julianne knew when she accepted the job that it was going to rub a lot of fans and other dancers the wrong way. If she wasn’t prepared for the backlash, then she really had no business joining the panel, and she was naïve to think that it would go over smoothly.