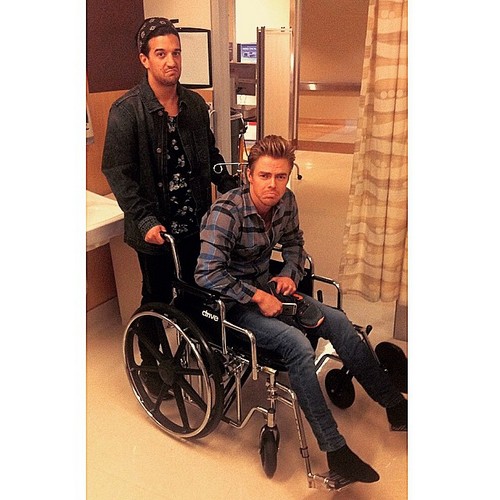 Dancing With The Stars pro dancer Derek Hough is out of commission after he injured his toe and sprained his ankle, but his partner Nastia Liukin is reportedly nursing him back to health. Derek’s sister Julianne Hough dished in an interview that Derek’s injuries are “very serious,” and although he was spotted out and about in Los Angeles on crutches – it has been revealed that he will not be competing on the live show with Nastia and she will now be dancing with another pro dancer, Sasha Farber.

Nastia Liukin and Derek Hough have gotten very close during their time on Dancing With The Stars, much to the dismay of Nastia’s boyfriend, Matt Lombardi. Reports hit the Internet earlier this month revealing that Matt was very jealous of Nastia and Derek’s connection, and the couple was reported to have gotten in to a huge fight when he accused her of cheating with pro dancer Hough.

Obviously, Dancing With The Stars fans and Nastia Liukin are devastated that Derek Hough is not able to perform on the show, but Matt Lombardi was thrilled when he heard the news. But, insiders say that Matt’s excitement quickly died down when he realized that Nastia was so upset over Derek’s injury and she even rushed to see him when he got out of the hospital. Matt already was insecure about his girlfriend’s relationship with Derek Hough, the fact that she was so worried about him and coddled him after he sprained his ankle just upset Matt more.

If Matt Lombardi isn’t careful, he is going to drive Nastia Liukin right in to Derek Hough’s arms with his accusations and insecurities. Who could blame her for wanting to be there for her dancing partner, obviously they are close – they spend six hours a day together rehearsing. But, could Derek’s injury bring them even closer and perhaps make Matt’s worst nightmare come true? Let us know what you think in the comments below.