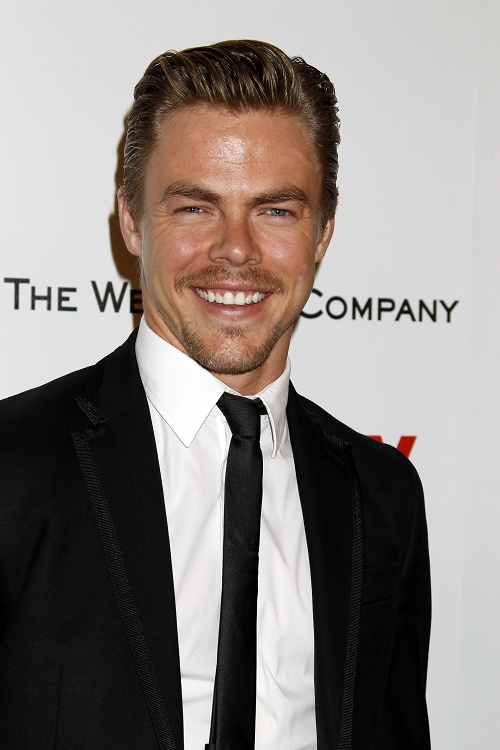 Is Derek Hough gay and quitting Dancing with the Stars to move to NYC because he wants to live an open, honest lifestyle away from the distractions of Hollyweird? Dancing with the Stars fans are probably losing every bit of sanity they have left, since they have now lost both Maksim Chmerkovskiy and Derek Hough. Maksim is attempting to become a movie star, but Derek’s reasons for quitting are a lot more simple – privacy, sanity, and the chance to live the lifestyle he wants. Unfortunately, being openly gay in Hollywood is still a rare thing, and very few people are willing to take that step. It’s stupid considering that Matt Bomer, Jim Parsons, and other openly gay actors have very successful careers, but we know Derek ain’t going to go that route. He and Nina Dobrev cooked up that showmance for a reason, right?

Of course, the ‘official’ reason that Derek has dropped out of DWTS is because he’ll be playing the lead role in New York Spring Spectacular at Radio City Music Hall, beginning on March 12th. Derek even told Broadway World, “Performing at Radio City Music Hall in a show that celebrates everything that is beloved about New York City is a dream. I can’t wait to show fans this production. It’s going to be like nothing they’ve seen me in before.”

Apparently, Derek plans to be back on DWTS in the fall, but really, nothing is set in stone. I mean, even his reasons for dropping out on DWTS’ 20th season are suspect. He’s going to turn down ridiculous amounts of money and attention for a chance to perform at the Radio City Music Hall in NYC? Honestly, it just reads like a thin excuse to move to New York and get away from the craziness of Los Angeles, for which I don’t blame him one bit. Plus, being on Dancing with the Stars for twenty seasons has to get tiring for anybody, even disregarding other factors going into his decision.

What do you guys think about Derek Hough taking a ‘hiatus’ from Dancing with the Stars, a.k.a. temporarily quitting to go perform at the Radio City Music Hall? Let us know your thoughts in the comments below.