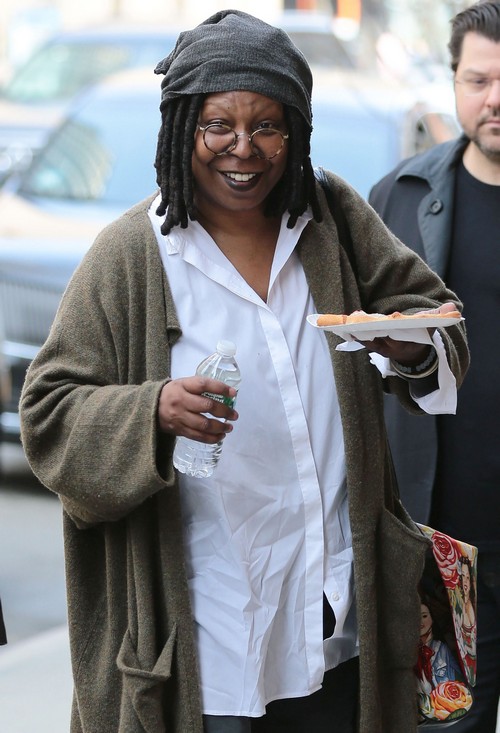 Is The View about to fire Whoopi Goldberg? There are have been four exits recently including Jenny McCarthy, Sherri Shepherd, Rosie O’Donnell and Rosie Perez. That’s most of the talent on the show and the only original cast member is Whoopi Goldberg. And now it looks like ABC has blamed Whoopi for the show flopping and the continual staff turnover.

According to network rumor, ABC wants Whoopi out and regrets not giving control of the show to Rosie O’Donnell. Instead, Rosie left over conflict with Whoopi and the ratings and problems with the show have continued to spiral down. The network insider called Whoopi “greedy” and said she won’t give up control of the show. The network doesn’t want to fire Whoopi, but definitely wants her out.

For now, ABC will bring back Sherri Shepherd and Joy Behar and are pressuring Raven-Symone to exit as well. It’s gotten so bad that Whoopi has made jokes about the revolving door of hosts in and out on the show – obviously Whoopi doesn’t see what the network sees – that she’s the problem and the reason that co-hosts keep walking out. ABC hopes Whoopi will see the signs and leave on her own.

Another factor in lower ratings and viewer dissatisfaction is Whoopi Goldberg’s ongoing and passionate defense of Bill Cosby which has turned off their mostly female viewership. As recently as July, Whoopi was denying mounds of evidence against Cosby and defending. This has prompted angry tweets from fans of The View including this one: “Whoopi is why #TheView is failing. The biggest Hot Topics are just swept under the rug. #BillCosby is a rapist! Friend of urs or not!”

ABC execs warmly welcomed Sherri Shepherd back while Whoopi was out for a family funeral and were thrilled with the taping. It took a little more effort to get Joy Behar back on board than it did Sherri Shepherd, though, because Joy thought the environment of the show had changed for the worse since Whoopi took control of the show.

An ABC insider reports that Joy Behar thinks, “Whoopi really runs the show now and Joy doesn’t like how Whoopi is a mean dictator behind the scenes.” But network execs are rumored to have promised Behar that they are going to force Whoopi off of the show as soon as possible and Joy can step back into the power position like she once had on the daytime program.

ABC executives are hopeful that the combined appeal of Joy Behar and Sherri Shepherd can undo the damage Whoopi has done to the show with her heavy handed manipulation of the show. And if those ladies can’t bring up the ratings, it looks like the only view left will be a view to cancellation of the long-running show that has turned into a travesty of the popular daytime hit that it once was.