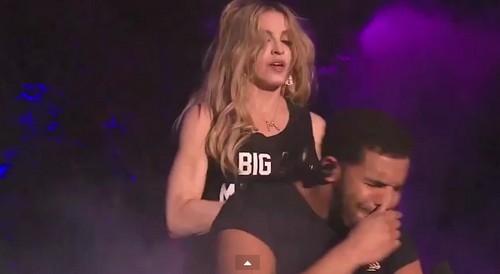 It looks like Jay-Z and Chris Brown were not the only ones carrying a baby daddy secret around, not if this latest report on Drake is accurate. According to a report from Media Take Out Drake secretly fathered a two-year-old child with a woman in Miami.

Apparently, some woman in Miami filed court documents alleging that Drake was the father of her two-year-old daughter. This Haitian-American woman – who so far has remained unnamed – reportedly works as a bottle waitress for LIV nightclub, because of course she does. This woman also claims that she’s told Drake about his daughter, and Drake has agreed to take a paternity test – a marked difference from the way Jay-Z is handling the situation with his own supposed son. Then again, Drake isn’t married, and Jay-Z is….

Until the paternity test determines whether Drake actually is the father, he’s reportedly paying this woman $15,000 a month in child support, which is more than many celebrities pay their exes even AFTER knowing that their exes actually did father their children.

So far, reps for Drake have had no comment, but could be taken as both ways – silence because they don’t know, or silence because they don’t want to give credence to what they assume are just silly rumors. Replying to ever single rumor that the Internet cooks up – especially if it’s from websites like Media Take Out – would take his reps forever. However, this is a big enough rumor that you’d think his reps would shut it down before it picked up steam, no?

What do you guys think? Did Drake secretly father a two-year-old daughter, and is he being this magnanimous about paying his alleged baby mama even before the results of the paternity test come back? Let us know your thoughts in the comments below.