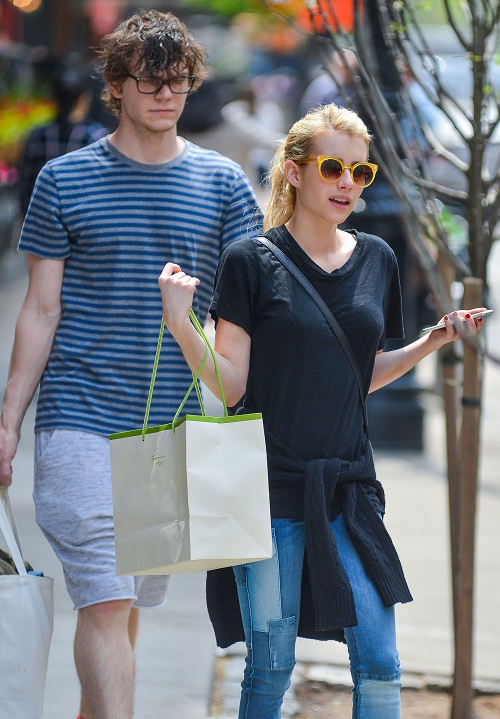 It’s official! Emma Roberts and Evan Peters have finally, and officially, broken up and called off their engagement. It’s about time! These two were destined to fall apart from the start. A source close to the couple revealed to JustJared, “Their three years together just ran it’s course. They have so many great memories together but couldn’t make it work in the end. The break-up was amicable. There was no drama whatsoever. Emma and Evan are even still friends!”

We aren’t sure if this source knows what amicable means, but we can guarantee you that this breakup was the furthest thing from amicable. Back in July 2013, before the couple was engaged, Emma Roberts was arrested for an alleged domestic violence incident with Peters.

At the time, TMZ reported that the incident, which took place in Montreal, Canada, led to Emma’s arrest, and she was taken into custody on July 7. According to the report, someone called the police to report a fight they heard coming from a hotel room, which just happened to be the room that Evan and Emma were inhabiting at the time. When police arrived, Evan was visibly beaten, bleeding, and allegedly had bite marks. Emma was arrested, but claimed that it was not only her, and that Evan was also hitting her. At the time of the incident, sources said that it was an “unfortunate incident and misunderstanding.”

Emma Roberts was released because Evan Peters did not want to press charges, but regardless, the incident occurred, and this is far from amicable. We need to stop making actions like this okay by brushing them away saying that a couple, who was clearly in an abusive relationship, broke up “amicably.” This was not an “unfortunate incident,” or a “misunderstanding.” Saying that justifies domestic violence and that is just not okay. The fact is that Emma Roberts and Evan Peters were in an unhealthy relationship from the start, and the two should have never gotten engaged.

We hope the reports are true and that this couple stays far away from each other for as long as possible. What do you think of Emma Roberts and Evan Peters breaking up? Let us know in the comments below.