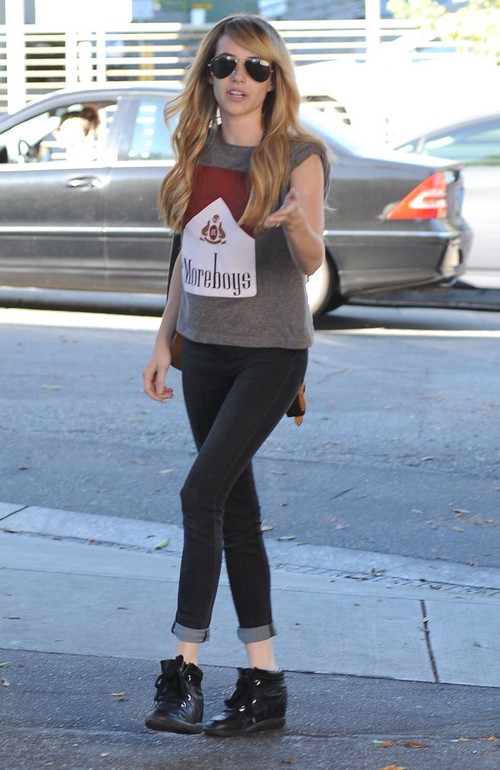 It’s been a year since Emma Roberts and Evan Peters had that little domestic abuse incident in Montreal, but have things gotten better for the couple? They’re engaged now, but that doesn’t mean that they have a healthy relationship. And according to Star Magazine, they’re still involved in violent altercations with each other.

Star claims that Emma and Evan got into an ‘explosive fight‘ at Comic-Con, where they were both present to attend the American Horror Story panel. Apparently, both Emma and Evan were at a Comic-Con afterparty at the Omni Hotel in San Diego, but Emma get worked up for some reason and started shoving Evan around. Evan then ran away from the party while security tried to ‘calm down’ Emma, to no avail.

A friend of the couple tells Star, “Their relationship isn’t healthy. They fight more than they get along and she has problems controlling her temper. She flips out at the drop of a hat.”

Well, we certainly have proof of that, don’t we? Evan probably fled because he didn’t want a repeat of last year’s incident, but if their relationship is this violent now, aren’t they better off breaking up? If they do end up getting married, they’ll certainly have an extremely unhealthy relationship going forward. Sure, it might be ‘passionate’, but with Emma’s violent tendencies, we might get a lot more stories resembling the Montreal fiasco in the future. Plus, they’re both so young and so temperamental, some time apart might do them good.

What do you guys think? Should Emma and Evan stay together and get married? Or should they break up? Let us know your thoughts in the comments below.

‘American Horror Story’ actress Emma Roberts stops by the Nine Zero One Salon to get her hair done in West Hollywood, California on August 4, 2014