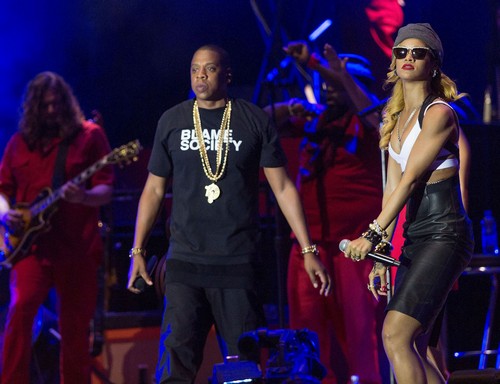 Jay-Z is trying to do some damage control, since he desperately wants Beyonce not to divorce and to stay with him. That begins with leaking some suspect reports to media outlets, including a story about how Rihanna definitely ‘did not’ sleep with him. Ok, dude, whatever you say, a Beyonce divorce is still on the way.

There have been an overwhelming number of reports suggesting that Jay-Z and Rihanna had an affair, not to mention the rumors about Jay-Z having an affair with every single on of his proteges, including Rita Ora. However, this report makes it seem like Rihanna and Jay-Z have a father-daughter relationship, with a source telling Hollywood Life, “Jay is like a father figure to Rihanna. Over the years, he’s helped groom her into the star she’s become and has been nothing but supportive of her and her career. That’s just it, nothing else.”

Sure, sure. And I suppose Jay-Z has a ‘father-daughter relationship’ with Rachel Roy and Rita Ora as well? Come on, we’re not stupid. He may actually have a legitimate mentor-mentee relationship with Rihanna, but he sure as hell doesn’t with these other women. Plus, we’ve already heard plenty of reports about Jay-Z’s other infidelities, so removing Rihanna from that list won’t make it that much better. Beyonce isn’t divorcing him because he slept with Rihanna, she’s divorcing him because he couldn’t keep his affairs a secret. He’s the one that’s making them look bad, and Beyonce won’t stand for any bad PR – especially when they make her look like a jilted wife. She may have looked the other way during Jay-Z’s affairs, but there’s no way she’s going to buy this desperate campaign on his part to win her back.