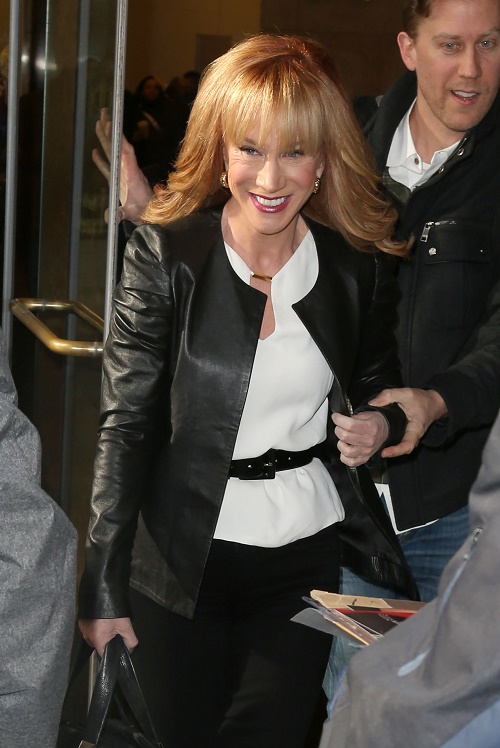 According to reports, E! has finally, finally decided to put Fashion Police on an extended hiatus, at least until the fall. It’s about time, no? The show’s ratings have been sky diving ever since Joan Rivers’ death, and E! tried too hard to keep the show on the air, as opposed to giving everybody time to grieve and move on. Moreover, they tried too hard to replace Joan and change the vibe of the show, and as we’ve seen, that has led to some major backlash.

Fashion Police executive producer Melissa Rivers and other E! executives have already discussed taking Fashion Police off the air, and they reiterated their reasons for their decision in an interview with the Hollywood Reporter.

They explain, “There’s a lot that’s frivolous about the whole Oscar, Emmy, Golden Globe parade, and then at the heart of it, there’s some great, creative work. E! is not a network that takes itself seriously. To the extent that this has all gotten very intense and serious — it’s meant to be fun. When it stops being fun or if we think that we’re offending or crossing a line, absolutely, that’s the time to re-evaluate and that’s what we’re doing, frankly, with things like the mani cam.”

And they’re right – the Fashion Police was never meant to be taken seriously, but in the past few months, they have definitely crossed some major lines. Kathy Griffin’s criticism and subsequent departure, the ‘racist’ tag that the show’s gotten, Guiliana Rancic’s racist controversy regarding Zendaya’s braids, Kelly Osbourne’s firing – all this has led to the show being mired in controversy for the past few weeks, and really, there’s no such thing as all controversy being a positive thing.

What do you guys think about the Fashion Police going on an extended hiatus, at least until the fall? Let us know your thoughts in the comments below.