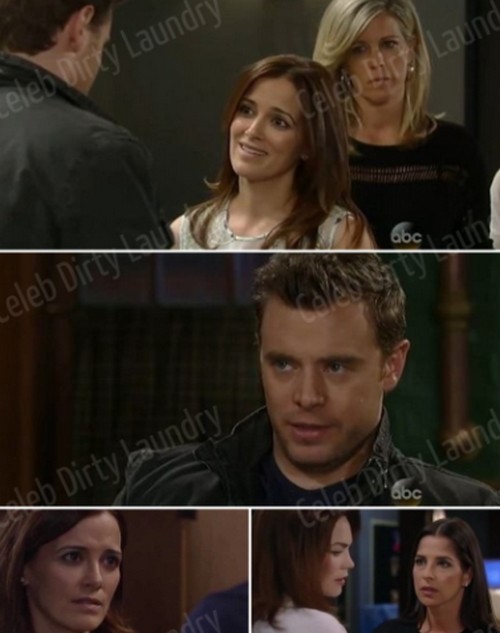 General Hospital spoilers examine the departure from the GH canvas of Liz Webber after Hayden Barnes tells Jake he is Jason Morgan. Rumors are circulating again that Rebecca Herbst is leaving General Hospital and if you have been watching GH it seems to be ringing true. Has Elizabeth replaced Helena Cassadine (Constance Towers) as the town monster? It is never comfortable to watch a mother using her children for their own selfish needs – Helena is guilty of that ten fold but in Helena’s defense they were grown whereas Elizabeth, a Nurse by trade, is using small children and hurting the man she professes to love and his child, little Danny. Elizabeth is a special kind of rotten – worse than Helena.

Ms. Webber (Rebbecca Herbst) has been diabolical, sneaky, cruel and pathetic on many levels and the only way for her is out – and that is out of PC. As CDL has previously reported Elizabeth the pariah will be leaving Port Charles with her head hung low, that is if this woman has any shame whatsoever for what she has done keeping Jason (Billy Miller) from his wife, child, friends and family – keeping his very life from him. CDL has also reported Jake (Billy Miller) will know he is Jason by the end of Summer which means Elizabeth’s days are numbered and in will come sister Sarah Webber to fill the Webber void at this point a Webber void would be welcome.

As Sonny (Maurice Benard) and Carly’s (Laura Wright) wedding approaches sources say GH fans will finally watch as Jake discovers he is Jason Morgan. CDL predicts Hayden Barnes (Rebecca Budig) will tell Jake who he really is , Jake will keep it hush to protect Hayden and he will put it together that Hayden was going to tell him in the Garage the day she was shot in the head. Jake with his street instincts will hone in on Nikolas Cassadine (Tyler Christopher) as the culprit – especially as Jake and Sam have already started thinking Nikolas knows Jake’s true identity. November sweeps will be the full disclosure of Jake’s identity to all as CDL has explained.

Jake will start assessing who he can trust and Elizabeth ain’t on the top of that list – as a matter of fact she didn’t make the cut at all. Jake will put it together that Elizabeth and Nik were partners in crime. Jake will put on a show for Elizabeth, pretending to care about her when really what he wants to do is ring her slimy reptilian neck!

Jake will try to regain Jason Morgan’s memories but will also be haunted with Jason Q’s memories which is all very confusing for him. Think about it CDL’ers, if Elizabeth stayed in town what kind of life would she have? Everyone will hate her and some will want to kill her! Sam and Carly will probably be first in line at that lynching. Fans are outraged and many cannot look at this character without wanting to slap her lying pathetic face. Let’s hope in the end Sam or Carly will get a couple of good ones in – although Carly may send her to the moon with one slap. Sam will have her day and GH fans will be rooting her on so until then Gh’ers hold tight – the end of Liz is coming!