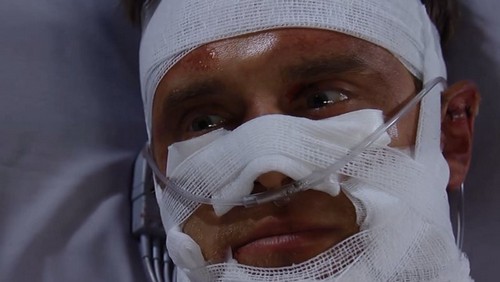 General Hospital Spoilers ask the $100,000 question: when will Jake Doe [Billy Miller] know he is Jason Morgan? For that answer we will need to rewind back to Crichton Clinic September 2014 when Robin Scorpio Drake [Kimberly McCullogh] is being held captive by Victor Cassadine [Thaao Penghlis]. Helena [Constance Towers] and Stavros Cassadine [Robert Kelker Kelly] were frozen and Robin had been taken hostage to bring them back to life – her family was threatened if she did not comply but the kicker was they also had her bestfriend Jason Morgan at the Clinic frozen. Victor told her she will be working on Jason Morgan as well. Robin struggled with the decision but in the end could not turn her back on her bestie.

Victor had Robin try the antidote on Jason first just in case it backfired and did not work. Once they knew it was a success they used it on the evil Cassadines. Jason then woke up tearing his tracheal tube out of his throat damaging his vocal chords as he and Robin escaped. During this time we never saw Jason’s face but we knew it was Jason because of Robin’s acknowledgement. During the great escape Jason could not use his voice because of the vocal damage. Robin & Jason drove away heading towards Sonny’s [Maurice Benard] but safety was not in store for them as Helena ended up capturing Jason at Sonny’s & captured Robin at her mom’s. Jason did get away but got hit by a car driven by Ava [Maura West], hence the plastic surgery on Jason Morgan creating “Jake Doe”with amnesia.

Sources say Kimberley McCullogh will be back in Fall sweeps to announce to the town of PC that Jake Doe is in fact Jason Morgan – but of course there will be several morsels thrown to the GH viewers along the way. For instance Nikolas [Tyler Christopher] has known Jake’s real identity for many months and viewers got restless so they threw us a morsel having Elizabeth [Rebecca Herbst] find out and of course keep the secret. They then bring in another distraction, Hayden Barnes [Rebecca Budig], then when she finally finds out the identity of Jake she is shot by Nikolas’s henchmen and slips into a coma before she can tell Sam [Kelly Monaco] the truth. The next bread crumb dropped was the latest revelation on the 7/20 episode when Laura [Genie Francis] overhears Nikolas telling Elizabeth that he told Lucky [Jonathan Jackson] Jake is Jason.

So as the viewers hold out hope that Elizabeth does the right thing they bring in ANOTHER distraction – Jake Webber/Spencer is alive, and why? They say for Luke Spencer’s [Anthony Geary] redemption but it seems it is more like a tool for Elizabeth to hold on to Jake Doe – because when he finds out who he really is this summer, yes we said this summer, he will definitely leave Elizabeth. Sources say when he finds out his true identity Elizabeth is up a creek and even little Jake cannot save her rotten deceptive hide. Elizabeth will leave town to be with Lucky at this time and another Webber family member will resurface to fill the Webber void in PC – TPTB will be bringing in Dr. Sarah Webber older sister of Elizabeth.

Sources say Jake Doe is next on the list of people to finally know who he really is but will not tell anyone – so the writers will throw us another morsel allowing Jason to learn his identity. But what the viewers really want is a long over due JaSam reunion – unfortunately that is not going to happen this summer. This Jake/Jason storyline has been like a full term pregnancy with all of the aches and pains along the way – every month throwing us a bone one more person knowing the identity of Jake Doe.

Cdl’ers can you hold out until November sweeps to see the full disclosure of Jason Morgan? Are you looking forward to Robin coming back? Please leave your comments & thoughts below.