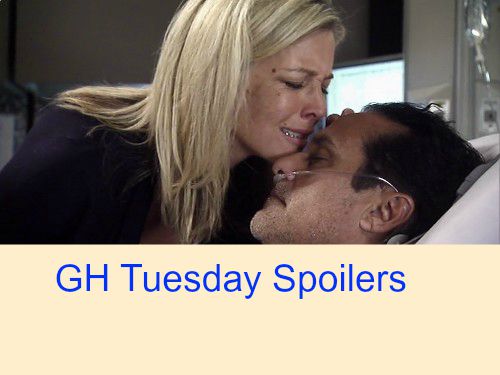 Check out some “General Hospital” spoilers for the Tuesday, September 29 show. Questions about Carlos prevail on today’s episode. If Carlos Rivera (Jeffrey Vincent Parise) really is dead, he must be turning in his grave at all the name dropping in Port Charles this week. After Ava Jerome (Maura West) blamed her pet hit man for the “rogue” shooting of Sonny Corinthos (Maurice Benard), Michael Quartermaine (Chad Duell) runs to the PCPD to share this questionable information with his brother Dante Falconeri (Dominic Zamprogna).

Paul Hornsby (Richard Burgi) overhears and is not happy that Ava deliberately disobeyed his instructions. No doubt there will be retribution, but how severe will it be and will Ava be able to sweet talk herself out of trouble with partner Paul? Anna is naturally stunned to hear Michael name Carlos Rivera (Jeffrey Vincent Parise) as Sonny’s would-be assassin.

Anna knows 100% this is a lie which makes her wonder if someone else knows she shot Carlos and that’s why he’s a perfect patsy since he can’t deny the accusation. Anna was already suspicious of Julian Jerome (William deVry) and now she’s got to be doubly suspicious of Ava as well. But how can Anna act on this knowledge without revealing her own criminal actions?

Michael wants Dante to put out a no-holds barred search for Carlos, but will Paul play along with the ruse since he knows Carlos didn’t pull the trigger? If Carlos is still alive, he may be working with Paul who will not want his criminal associate tagged for the shooting. Paul felt safe having Ava target Julian since there’s no evidence tying Julian to the crime, but then Ava screwed up the plan. Complications…

Ironically, even though Ava’s misinformation campaign at the five families meeting got the scrutiny off of Julian, her actions may prove dangerous to both Julian and Sam if Paul gets an inkling that the pair are getting close to revealing his truth. Ava also tells Julian she’s going to continue running the family business even though he’s determined to stay out of it.

Sam says she’s ready to move on from Jason and thanks Jake Doe (Billy Miller) for spending time with her at Noodle Buddha. This is all well and good, but no way will Liz Webber (Rebecca Herbst) be as understanding of this renewal of vows as Jake assured Sam she would be. Liz is going to freak out. Just wait for it in 5, 4, 3, 2 and BOOM.

And when will someone realize that both Mrs. Yi and Sonny mistook Jake for Jason when his physical appearance was not an issue? Someone must be leaking dumb juice into the water supply in Port Charles. But rest assured, we’ve got about a month left of this silliness – the big public reveal is slated for November 6th at Jake and Liz’s wedding. Can’t wait…

Kyle Sloane (Robb Derringer) must have a death wish considering the way he’s interacting with Nikolas Cassadine (Tyler Christopher). Doesn’t he know the Prince is dangerous? Nikolas and Hayden Barnes (Rebecca Budig) are on date night at the Floating Rib talking about their past when Kyle interrupts their date to make trouble. Kyle wants the money that Nik promised.

Kyle makes a big public scene and the back and forth lets Hayden know that Nikolas has more dirty laundry that she’s yet to see. Seems like Sloane is putting a very big target on his back – his time will run out soon – will it be Nik who kills him or is responsible for his death? Later, Hayden will eavesdrop on a private conversation Nikolas has with someone else. Is it with his secret partner Paul? With Sloane? With Helena?

And the biggest news of course is Sonny’s mid-wedding seizure that sends him into a medical crisis. Patrick Drake (Jason Thompson) and Liz will get Sonny stabilized, but then Patrick has to deliver some dire news to Carly Corinthos (Laura Wright) about Sonny’s medical prognosis. Looks like Sonny will have a much harder recovery than anyone thought and he’s weaker than he has ever been.

The wedding cut short will prove a further crisis for the Corinthos clan because that means Carly has no legal rights to Avery since she’s not Mrs. Corinthos and not Avery’s step-mother. Will rat fink Ric Lansing (Rick Hearst) be able to shut down Ava’s custody bid or is it a done deal? No wedding and Paul is on Ava’s side influencing the courts. Baby Avery may be in Ava’s arms very soon.

Don’t miss a moment of Tuesday’s gut-wrenching action in Port Charles and check back with CDL for more “General Hospital” spoilers, gossip and more.