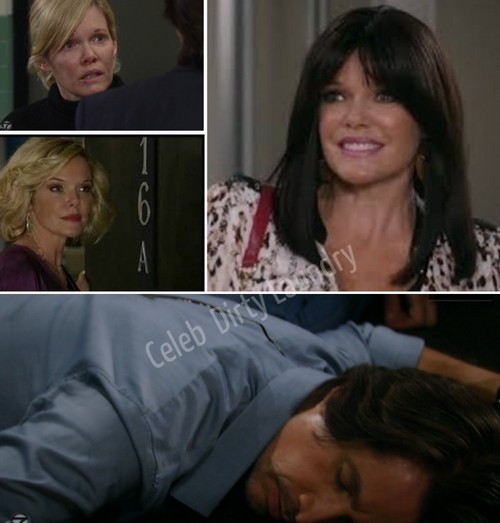 Lots of action and storyline movement this week – check out these “General Hospital” spoilers for the week of August 3 through August 7. After Morgan Corinthos (Bryan Craig) comes clean to Sonny Corinthos (Maurice Benard) about fooling around with Denise DeMuccio (Maura West), both his parents will know he’s been too, too naughty. This will cause Carly Corinthos (Laura Wright) to confront Denise, but will Carly also ask if Denise is responsible for the recent mob activity against Sonny as well as shagging her son?

Sonny advises Morgan to come clean with Kiki Jerome (Hayley Erin) ASAP but will he? Or will Silas Clay’s (Michael Easton) death distract her to the point that Morgan can’t have the conversation? Sonny wants to get to the bottom of the attacks and calls a meeting of the five families to find out more. Morgan tells his parents he’ll stop it with Denise (he won’t) and Carly keeps a closer eye on Morgan.

Ava Jerome has a truth bomb to drop – is she going to reveal her true identity? Reveal that she’s taking over the Jerome territory? Or will it be that Morgan is baby Avery’s true daddy? Meanwhile she’s got to deal with a distraught Kiki who finds her dad Silas’ body in their apartment when she comes back from the Hamptons. Jordan Ashford (Vinessa Antoine) will move forward with the kidnapping investigation.

And finally some traction on the gay marriage story! Felix DuBois (Marc Samuel) encourages Brad Cooper (Parry Shen) to work it out with his sweetie Lucas Jones (Ryan Carnes). Brad never got the chance to explain that he’s stuck in an arranged marriage and it isn’t a “real” union, but Lucas is mad and has not come home, so this will be a bumpy road.

Franco (Roger Howarth) finds Nina Clay (Michelle Stafford) with a bloody knife standing over Silas’ corpse. She begs for help and Franco obliges. He gets her out of there and then goes to talk to Dr Obrecht (Kathleen Gati) about her crazy sister Madeline Reeves (Donna Mills) plotting to steal Nina’s money in cahoots with Ric Lansing (Rick Hearst). Nathan West (Ryan Paevey) stands by his big sister.

Madeline is scared that Franco is going to throw a wrench into their gaslight plans and he might. But then it looks like Nina might tell Ric about the Silas and bloody knife situation. Ric of course will volunteer to help her fight murder charges so long as they stay hitched. Could Nina be playing back into Ric and Maddy’s hands just as she was getting loose?

Sam and Jake wonder how much Liz knows and if she can really be trusted. Jake and Sam turn up info on Nikolas Cassadine (Tyler Christopher) then Sam will confront her cousin and demands answers. Laura Spencer (Genie Francis) decides to keep Nik and Liz’s secret but that won’t matter soon anyway.
Liz isn’t sure if she can trust Nik after she asks him if he had Hayden shot.

Jake tells Liz some info which she turns right around and blabs to Nik. Were Jake and Sam testing her? If so, Liz will fail monumentally. Sam also admits to Patrick that she and Jake have teamed up to get answers about his identity, Nik’s takeover of ELQ and other important matters. Patrick wants to get a ring on her finger sooner rather than later.

And, this is fun – Dante Falconeri (Dominic Zamprogna) and Lulu Spencer (Emme Rylan) have a double date with Dillon Quartermaine (Robert Palmer Watkins) and Valerie Spencer (Brytni Sarpi). Whose bright idea was that and how could Lulu want to have dinner with her ex and his new GF who was just making out with her husband? Awkward, anyone?

Tune in to CDL all week for lots more “General Hospital” spoilers, gossip and news every day.