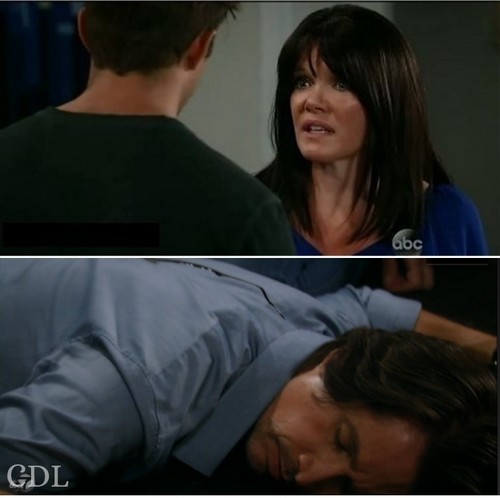 General Hospital spoilers offer a detailed explanation of why we think Ava Jerome (Maura West) is Silas Clay’s (Michael Easton) murderer. When reading this theory keep in mind the old fable “The Farmer and the Snake.” The story is about a farmer who finds a poisonous Snake freezing in the snow – taking pity on it, he picks it up and places it in his coat pocket. The Snake, revived by the warmth, bites his rescuer, who dies realizing that it was his own fault. Now let’s proceed with why we think Ava murdered Silas.

Ava Jerome has known and wanted Silas Clay for 20+ years – they even share a daughter Kiki (Hayley Erin) together (see CDL post on a pending possible casting change to Kristen Alderson). Silas has a special place in his heart for Ava and she “claims” she has/had that same special place in her heart for him.

Ava is a hard core sociopath not caring whose life she ruins – she takes what she wants and kills who she thinks is a threat to her and her mob life. Ava lies as easy as she breathes. Silas is the one person that has always known what Ava is about yet despite her rotten disposition he has always seemed to find a place of compassion for her. Ava has always been connected to Silas because she knows he is really the only one that knows the real her or does he?

When Ava went to prison for the murder of Connie Falconeri (Kelly Sullivan) she escaped then got shot by Carlos Rivera (Jeffrey Vincent Parise) and fell off a bridge into dark waters – leading everyone to believe she was dead. It is going to be harder than that to kill off this snake – Ava slithered herself to the only place she knew she would be safe and that was ex love Silas “pushover” Clay. Ava has always known how to pick her man victims. Silas was angry with Ava before she was shipped off to Pentonville after finding out she murdered an innocent human being in cold blood. BUT once again Ava knew how to manipulate her way back into his good graces by using the fact that she was a new mommy to baby Avery.

In March of this year rumors were rampant that Maura West was leaving GH for personal reasons – the only problem with that was she had 6 months left on her contract so TPTB seemed to want to utilize her character until her contract was up. Thus writing the Ava has cancer storyline.

Silas once again had compassion even overlooking the fact that she was a murderess he took her to a basement hospital facility in NY. Silas treated her gunshot wound telling her he would turn her in once she healed up. Ava seemed to show signs of humanity towards Clay during this time. As Clay noticed Ava getting weaker by the day he ordered tests which then came back positive for a rare form of cancer. We watched as Ava’s character ends up on death’s doorstep and we see Ava seem genuinely sorry for the rotten things she has done – even Silas believed her. Silas acts like every other man that has had love for this sociopath – he breaks the law to protect and save her.

The only bone marrow match which could save this evil monster is her that of her tiny infant Avery. Ava says “no you will not take Avery’s bone marrow” but Silas is desperate to save this lying snake’s life. Silas kidnaps Avery, steals her bone marrow drops her back home and saves Ava.

Silas and Ava shared some very tender moments during this scary life and death situation but with Ava Jerome it’s out of sight out of mind and onto the next victim. Silas has been keeping the fact that Ava is alive a secret and has put himself at risk for going to prison for a long long time and losing his medical license. With just a few months left on Maura West’s contract the character of Ava shows up in Port Charles with a bad Brooklyn accent and an even worse a dreadful black Halloween wig that makes us all scream “tear it off” to anyone in a scene with her – welcome Denise DeMuccio!

Keep in mind Ava is a sociopath and sociopath’s do not have real human emotion – they only care about themselves – they use people to get what they want and then discard of them. Her “love” for Avery is probably the only real human emotion she will ever have and that is because Avery has the snake’s blood running through her veins. Kiki does not why selfish Ava/Denise DeMuccio could continue to have sex with her daughter’s  boyfriend (more about this issue of Kiki’s biological mother in a future CDL post – is Kiki REALLY Ava’s daughter).

Ava has also been blackmailing Silas, the man who saved her life, because once again it is all about Ava Jerome. Ava murdered Connie Faloneri (Kelly Sullivan) because she discovered brother Julian Jerome’s (William DeVry) true identity. Ava is now trying to protect her own identity – if she killed for her brother to protect his identity why wouldn’t she kill to protect herself from being exposed? Of course she would!

Silas found out Ava/Denise was having sex with his daughter Kiki’s boyfriend Morgan and he warned her she better stop or he was exposing her. Silas then walked in on them seeing that she continued to have this affair Silas went sideways threatening them both that Kiki will be told!!!

When Ava gets that desperate look in her eye everyone better run for cover because somebody is going to die.

At the end of Friday July 31 GH episode Silas is found stabbed in the back – they have a list of suspects coming but the only one that makes sense is Ava Jerome. Morgan is not a murderer – dude had a nervous break down when he accidentally shot Max (Derk Cheetwood). With Maura West’s contract coming to an end she is the only real feasible suspect. They have yet to punish her for Connie’s death – why would they have another murderer running around when they can pin it on a character who is already up a creek for murder, killing two birds with one stone. TPTB have painted Ava into a corner the only way out for her is to do hard time. This would be a perfect time to give Maura West the time off she wants and have a rotten character do her time for two murders. Silas put her in his pocket to protect her and in the end she bit him because a snake is always a snake. Stay tuned as the Murder of Silas Clay takes center stage on ABC’s GH.