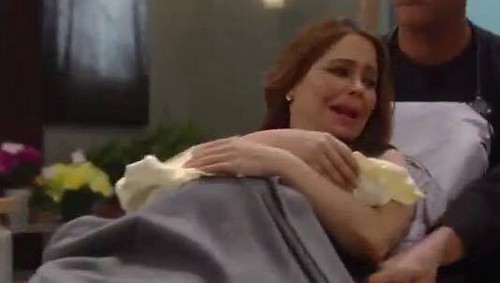 Today’s show will delve into the mob violence brewing in Port Charles. Here are some “General Hospital” spoilers for the Friday May 8 and Monday May 11 episodes. Commish Sloane (Grayson McCouch) butts into Anna Devane’s (Finola Hughes) life and tries to convince her that Duke Lavery (Ian Buchanan) is guilty of targeting her CI Jordan Ashford (Vinessa Antoine) but Anna doesn’t want to believe it. Sloane presses her to face facts and not run off with the Scottish mobster. Anna wants to know why Sloane cares. Thing is, he does care. But will Sloane admit he has feelings for Anna or just play it off as concern for fellow law enforcement officer?

And speaking of Jordan, Bruce creeps into her apartment and shoots her in the bed. But “General Hospital” spoilers indicate that Jordan heard him coming and wasn’t in the bed. Jordan won’t emerge unscathed from the hit on her life, but she’ll survive and it will be Bruce who ends up toes up and pushing up daisies… But Bruce’s presence will make it undeniable to Anna that it was Duke that ordered the hit on Jordan. But Anna will have more important things to think about very soon.

After Carlos Rivera (Jeffrey Vincent Parise) grappled with Duke and a shot went off, Jake Doe (Billy Miller) will head back to the MetroCourt from his sexy night with Liz Webber (Rebecca Herbst). He finds blood and a gun in the garage and this will lead to Nathan West (Ryan Paevey) suspecting that Jake was involved. Depending on when it occurred, though, he has an alibi with Liz. Duke was shot and will die today. And there goes Anna’s happy ending. At least Sloane can comfort her!

Sabrina Santiago (Teresa Castillo) chats with Michael Quartermaine (Chad Duell) and he asks her if she’s into what’s happening between them. Michael wants to move forward with Sabrina but also wants to give her a chance to put the breaks on before things gets more complicated now that they have Avery back and are once again employer-employee. Later at her place, Sabrina gets a visitor that surprises her – will Carlos show up looking to hide at her place yet again to avoid the cops?

We haven’t seen Franco (Roger Howarth) and Nina Clay (Michelle Stafford) in a while. But we’ll catch up with them on Friday’s show and the two quasi-reformed nutters will talk about their relationship. Now that Avery has been found, Nina will press Franco on the fact that she tried to tell him she was innocent but he didn’t seem to believe her. Franco has real feelings for Nina and will do whatever it takes to smooth things out so he doesn’t lose her.

And speaking of babies, Patrick Drake (Jason Thompson) tells Olivia Falconeri (Lisa LoCicero) that her baby is coming and they don’t have enough time to get to GH. She’ll have to give birth at the MetroCourt. This is lucky for Julian Jerome (William deVry) since daughter Sam Morgan (Kelly Monaco) just told him that he’s about to be a daddy again. Julian will finally get to be at the birth of one of his children.

Although fake baby daddy Ned Ashton (Wally Kurth) is there too, Julian will insist on staying and will be greatly moved by the birth. This may sway Olivia and, since Ned is heading out of Port Charles for a while soon, maybe this will spark a Julian-Olivia romance as they bond over their child. The Julian- Alexis Davis (Nancy Lee Grahn) romance is pretty boring. Plus – Alexis will find out soon enough that Julian had Duke killed. As an officer of the court, Alexis can’t keep turning a blind eye to his crime.

Friday’s episode is not to be missed and Monday’s will be great as well! Watch today’s GH then head back to CDL for more “General Hospital” spoilers and gossip.

Enjoy the General Hospital sneak peek spoilers video preview from You Tube for May 11, 2015