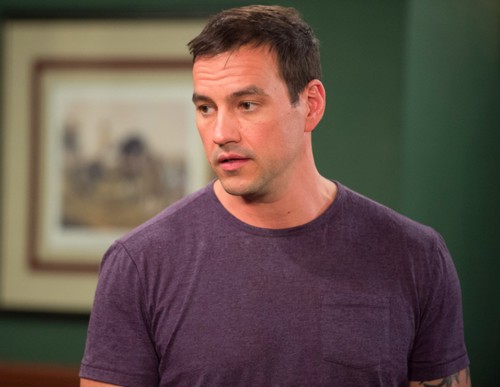 ELQ takeovers, sexual bargains and secrets abound! Check out these “General Hospital” spoilers for the Wednesday, June 24 episode of the hit ABC soap. We saw on Tuesday that Lucy Coe (Lynn Herring) issued a surprise vote in support of Nikolas Cassadine (Tyler Christopher) at the ELQ emergency board meeting. Today, Tracy Quartermaine (Jane Elliot) will turn on Lucy and demand answers for why she betrayed the Qs including her and Michael Quartermaine (Chad Duell). Lucy will try and justify how she voted, but will Lucy’s answers satisfy Tracy? And did Lucy side with Nik because she thinks he’s best to lead ELQ?

But Nikolas has other issues outside of his recently successful attempt to make sure he’s got voting power at ELQ. Rosalie Martinez (Linda Elena Tovar) told the cops such a tale about his shenanigans that the Cassadine prince might be facing jail time for corporate espionage. But that threat won’t last long. Nikolas will confront Rosalie and order her to retract her statement ASAP. If she does, that means Rosalie herself could face jail for the shady goings on at ELQ.

But the bottom line is, Rosalie is more scared of her secret coming out than she is of ending up behind bars. What the heck is Rosalie hiding that Nikolas and Helena can use her like this and she will take whatever they dish out to keep it secret? Did she kill someone? Nikolas will deal with Rosalie harshly then will go on to make a more kindly overture to Dillon Quartermaine (Robert Palmer Watkins). Nikolas still needs a bit more voting power on the board and Dillon could help him.

But Dillon is furious at Nik’s maneuvers and how he approached him to try and get the stock. But Nik can usually make people see reason. Is there any way Nik can sway Dillon? And will Dillon stay to fight about ELQ or will he come to Lulu Spencer’s (Emme Rylan) beck and call? Laura Spencer (Genie Francis) will contact Lulu to give her an update about Lucky Spencer’s (Jonathan Jackson) kidnapping. Lulu will head to help her parents sort this out soon with Dillon in tow.

And with the kidnapping, we know it was a deal where Jennifer Smith (Holly Gagnier) wanted to get lucky with Luke Spencer (Anthony Geary) so she took Lucky captive. Jennifer wasn’t offput when Laura told her she was basically raping Luke (wah, right?). And Luke finally agreed to do it. Wow, what a sacrifice… So Jennifer got her night of “fun” with Luke and he wakes to find his scheming lover Jennifer all smiles. But it’s very unlikely she’ll just hand over Lucky as promised. She’ll want more!

Back in Port Charles, Lulu will have to deal with her husband Dante Falconeri (Dominic Zamprogna) who, thanks to Valerie Spencer’s (Brytni Sarpi) understandable meddling, knows that Lulu is secret-keeping with Dillon. Dante will be clever and will try and get Lulu to offer up explanations about why Dillon was at their place. Lulu will lie and this will confirm the worst thoughts Dante is having. Also, now that Maxie Jones (Kirsten Storms) knows something is up with Dillon, things will go badly.

Maxie can’t ever keep her mouth closed. Will Maxie blab to Nathan West (Ryan Paevey) who will then mention it to Dante to make things worse? Or will Maxie run to someone else and yack about it for Valerie or Dante to overhear? The bottom line is that involving Maxie rarely makes anything better, particularly when secrets or relationships are involved. No matter that Maxie wants to help Lulu, she won’t and this could be the beginning of the end for Lulu and Dante.

And on the mob front, Sonny Corinthos (Maurice Benard) has a sit down with TJ Ashford (Tequan Richmond). Sonny used his influence to get the trumped up charges against TJ dropped and TJ will be grateful, but how grateful? TJ gives Sonny an interesting piece of information when he tells them that it was Duke Lavery who tried to have his mom Jordan Ashford (Vinessa Antoine) whacked. Sonny will be impressed that TJ is holding up under the stress and keeping confidences.

In fact, Sonny will be so impressed that he makes TJ an offer he may not want to refuse. But first, TJ wants to know if Sonny green lit the hit on his mom. Sonny tells him he had nothing to do with it, but TJ will still consider saying no since Jordan is the new police chief. But he will eventually take Sonny up on the offer. After all, TJ’s male idols are all mobsters, so it seems inevitable he would get his hands dirty. Once Jordan hears, she tells Valerie that Sonny is the enemy and she’ll be ready to go after him.