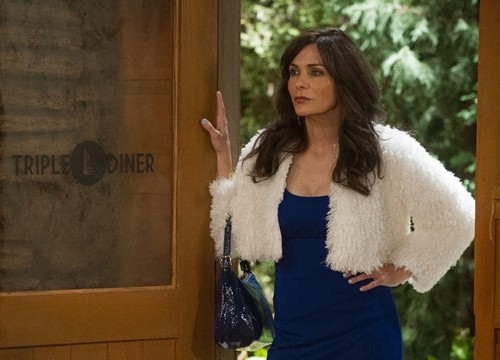 Sure enough, GH is off to a crazy start this week – here’s a look at some “General Hospital” spoilers for the Tuesday June 23 episode of the hit ABC soap. First, how about a blast from the very strange past? Jennifer Smith (Holly Gagnier) is back from out of nowhere and reveals she kidnapped Lucky Spencer (Jonathan Jackson) to force Luke Spencer (Anthony Geary) to spend the night with her. She’s Frank Smith’s daughter from back in the day that Luke was supposed to wed but ditched. Jennifer will tell Luke if she gets Lucky, he gets Lucky. That’s disturbing on all sorts of fronts. On the positive side, Jennifer is lucking much better than when Roseanne or Sally Struthers inhabited the part. Gagnier is one hot 56 year old chick.

And now that the Qs, Sam Morgan (Kelly Monaco), Jake Doe (Billy Miller) and everyone else in town know that Nikolas Cassadine (Tyler Christopher) is the culprit behind the ELQ takeover, it looks like Nik is going to have some fun. Prince Nik will park his cookies at ELQ and says “what’s up?” After all, he’s got 50% of ELQ anyway, so why not? Tracy Quartermaine (Jane Elliot) and Michael Quartermaine (Chad Duell) can’t exactly kick a major shareholder to the curb, right?

But they’ll try – Tracy and Mikey will call an emergency board meeting at ELQ. Dillon Quartermaine (Robert Palmer Watkins) will show up and will rage at Nik for trying to rook him out of enough stock to tip him over into the majority. Count on Nik to be nonplussed by Dillon’s anger – or any of the Qs. Now that his truth is out, Nik will embrace the role of villain but make it clear that he’s going to make them all lost of money so they should just shut up and deal with it. 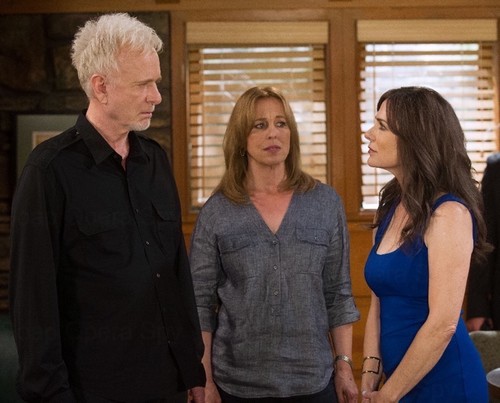 And when Jake and Sam are talking about the fruits of their investigation – her getting Nik to confess and Jake getting Rosalie Martinez (Linda Elena Tovar) to confess – we’ll see their growing rapport. Unfortunately, so will Patrick Drake (Jason Thompson) and Liz Webber (Rebecca Herbst). Liz and Patrick run into Jake and Sam at the MetroCourt restaurant and they decide to do an impromptu double date. Trouble is, it will be obvious to Patrick and Liz that Sam and Jake have chemistry. But only Liz knows why…

Once Nik finds out that Rosalie outed him, he will put the screws to her even more severely. Rosalie thought he was trouble before, but he’s about to get ruthless. The question remains, what is he holding over her head. He’s paying her, but it’s not just about money. Rosalie has a secret that both Nik and Nina Clay (Michelle Stafford) are sitting on that Rosalie will do anything to keep quiet. It must be big and bad.

Back at the Port Charles Police Department, Valerie Spencer (Brytni Sarpi) comes back from her talk with Lulu Spencer (Emme Rylan) a bit offput by what she saw. Valerie tells Dante Falconeri (Dominic Zamprogna) she saw something at his loft. Valerie will weigh whether to tell him and put the marriage at risk or whether to protect her cousin Lulu. When Dante pressures Valerie, she’ll come clean about seeing Lulu with Dillon and them keeping secrets.

This will bring Valerie and Dante closer and put a wedge between Lulu and Dante since Lulu will not be able to tell him the truth. Maxie Jones (Kirsten Storms) tells Lulu about her conflagration with Valerie and Lulu will dismiss it because she’s way too distracted worrying about brother Lucky. But when Maxie presses her, Lulu won’t be able to tell her either. Will Maxie assume something is up with Dillon? And now that Jennifer knows Lulu knows, soon Lulu and Dillon will head for Canada.

But since Valerie told Dante what she saw and Lulu will not be able to tell Dante the truth, he may assume the worst about why his wife and her ex-lover are leaving town together. There will be growing trouble in paradise at the Falconeri household. And also look for interesting exchanges between Denise DeMuccio aka Ava Jerome (Maura West) and Franco (Roger Howarth) who will soon be “dating.” And Ric Lansing (Rick Hearst) is up to no good this week too – but with Madeline Reeves (Donna Mills).

Be sure not to miss a moment of tomorrow’s GH episode then check back with CDL for lots more “General Hospital” spoilers and gossip.