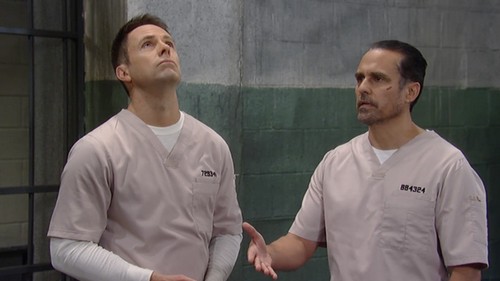 “General Hospital” spoilers tease that the episode of the ABC soap airing on Thursday, January 29th will be full of drama as the residents gear up for the highly anticipated Haunted Star party – which GH writers have promised fans they will not want to miss. Rumors have been floating around for quite a while regarding the identity of Fluke for months now. Judging from the looks of the spoiler video for Thursday’s episode – we are getting very close to the big reveal.

This week on “General Hospital,” Dante Falconeri headed to the house where Fluke and Helena were keeping the real Luke Spencer hostage and decided to go down in the basement to investigate. The GH spoiler video for Thursday’s episode of the ABC soap shows that Dante is in way over his head, and in serious trouble. In the sneak peek video, Fluke can be seen tackling Dante and tumbling down the stairs with him into the basement, and it doesn’t look good. Fluke (Anthony Geary) may have overpowered Dante – but how long can he keep a Port Charles cop hostage before someone comes looking for him and realizes that Fluke is an imposter?

In other “General Hospital” news, there could be a major hiccup in the Pentonville prison break. Ava, Julian, Sonny, and Franco planned to hitch a ride with Madeline in a transport vehicle back to Port Charles. In the “General Hospital” spoiler video for tomorrow’s episode, Ava and Madeline (Donna Mills) are preparing to leave Pentonville and Ava (Maura West) spots something or someone and freezes in horror. Meanwhile, back in Port Charles, Carly decides that as Jake’s friend it is her duty to turn him into the cops and stop him from whatever it is he is doing, and she heads to the Port Charles Police Department. She may be too little too late though, because while she is chatting with Nathan (Ryan Paevey) – Jake/Jason Morgan calls Helena (Constance Towers) and tells her that he completed his latest mission.

So GH fans, what will Fluke do with Dante? Will someone figure out where Dante is and come rescue him? What do you think Jason’s (Billy Miller) mission was? Is it something to do with the Haunted Star party? Let us know what you think in the comments below and don’t forget to check CDL tomorrow for more “General Hospital” spoilers and news.