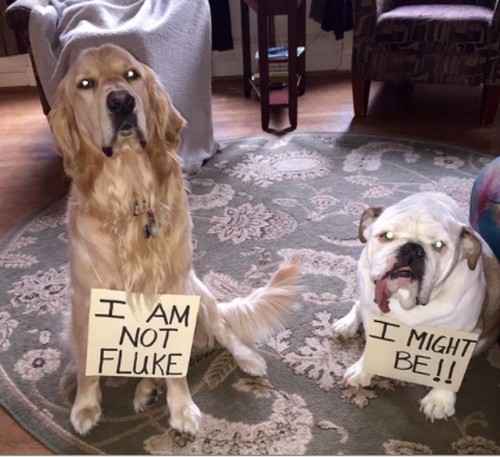 “General Hospital” spoilers tease that in the month of February the Fluke mystery will finally be resolved, and the identity of Fluke – Luke Spencer’s impostor will be revealed. GH fans have been racking their brains for nearly a year now trying to figure out who the impostor is that has stolen Luke Spencer’s identity and is wreaking havoc on the residents of Port Charles. Tons of “General Hospital” theories have been floating around the internet about who Fluke may be, but it is becoming increasingly clear that there is much more to the storyline than meets the eye – and it is far more complicated than any of us originally thought.

So, who is Fluke? Well, it seems pretty obvious that Helena Cassadine is really the one running the show and the brains behind the operation, and the villainess has finally mastered her mind-control tactics. What if Fluke is actually Luke Spencer, and he is under Helena’s mind control? If Helena has Luke Spencer brainwashed, that would explain how Fluke has managed to trick everyone – even Tracy and his family, into believing he is really Luke Spencer – because technically he is. Also, that would explain why Helena refuses to tell Fluke the name of her “Soldier Boy,” if she were to say the name “Jason Morgan” it could trigger his memory and bring him out from under her spell. Furthermore, do you notice that Helena treats Fluke like a mental patient, not like a dangerous mobster?

If Luke Spencer is Fluke, then who has he been holding hostage in the basement of the Bill Eckert house? If Luke is under Helena Cassadine’s mind control, then the chair could very easily be empty and his conversations with his prisoner could all be in his head. Another possibility is that Luke actually has Duke Lavery tried up in the basement, and because he is under Helena’s mind control he honestly believes that he is Fluke and Duke Lavery is the real Luke Spencer. When we see the Fluke and Luke scenes, we are seeing them through Luke’s eyes, and he honestly believes that when he is talking to Duke, he is talking to the real Luke Spencer. Furthermore, what adds weight to the Duke in the basement part of the theory is that Lord Ashton, always known as a viper, has vanished as of late. Recall when Sam and Patrick opened Ashton’s safe deposit box and found a computer memory stick which had on it a blueprint for a making mask of Duke! Could the real Duke be in the basement and Lord Ashton (who is working with Jerry Jacks and Helena) be masquerading as Duke?

“General Hospital” fans have thought for quite a while that something has been up with Duke Lavery, he began acting out of character a few months ago and totally shocked viewers when he gave his longtime love interest Anna Devane the cold shoulder and began hooking up with Lucy Coe. If Duke Lavery is an impostor, then he could be Lord Ashton. Well, Duke began acting strange around the same time that Lord Ashton was in town – and he conveniently disappeared after Sam and Patrick discovered a blueprint for a mask of Duke Lavery’s face on his computer. One of Helena and Fluke’s ultimate goals was to take over Sonny Corinthos’s territory. Since Sonny appointed Duke to be in charge of the Corinthos operation while he was in jail, it would make sense that Helena would kidnap the real Duke and send one of her men in as a impostor to get her hands on Sonny’s territory.

Sure this Fluke theory is complicated, but if you think about it – the writers are not going to make it as simple as “Bill Eckert is Fluke,” when the big reveal comes it is going to be full of lots of twists and turns, and multiple parties will be involved. So, here is our latest Fluke theory in a nutshell – Fluke is actually Luke Spencer, he has been brainwashed and is living under Helena Cassadine’s mind control. The real Duke Lavery is being held hostage in the Bill Eckert basement, and because Fluke is brainwashed, he actually thinks his hostage is the real Luke Spencer. Lord Ashton is still working for Helena, and she has him wearing a Duke Lavery mask and in position to hand over Sonny Corinthos’s territory to her.

What do you think GH fans? Could Fluke really be a brainwashed Luke Spencer? Do you think Duke Lavery is an imposter as well? “General Hospital” spoilers tease that this week on the ABC soap Dante breaks in to the basement at the Bill Eckert house, who do you think he will find down there? Will the chair be empty, will the real Luke Spencer be in it, or will it be the real Duke Lavery? Let us know what you think in the comments below and don’t forget to check CDL tomorrow for more “General Hospital” spoilers and news.

Thanks to our great friend Ava for solving the biggest GH mystery in a long time!