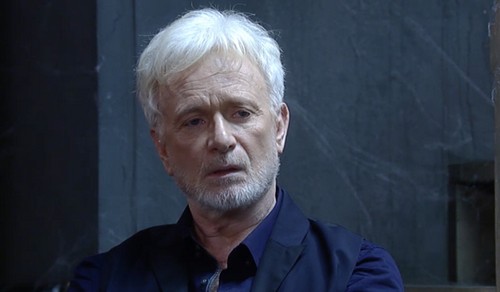 “General Hospital” spoilers tease that the episode of the ABC soap airing on Tuesday January 27 will be an exciting one full of revelations, and GH fans will not want to miss a single second of it. A popular theory floating around Port Charles is that Fluke (Anthony Geary) is actually Luke Spencer’s doppelganger cousin Bill Eckert, who is supposed to be dead. Sonny ordered Shawn to dig up Bill Eckert’s grave and found the coffin empty – further supporting the theory that Bill is Fluke. However, the “General Hospital” spoiler video for January 27 teases that there may be much more to the Fluke mystery than something as simple as Luke’s cousin Bill Eckert.

The “General Hospital” spoiler video for Tuesday’s episode of the ABC soap shows a furious Fluke demanding to know what Helena Cassadine (Constance Towers) “has done,” after he leaves the cemetery and sees that Bill’s grave was dug up. The “GH” writers love throwing in Red Herrings, especially when it comes to the Fluke mystery – so perhaps Helena was throwing out a Red Herring of her own for the nosy residents of Port Charles to find. It kind of seems like the reason Fluke is so upset with Helena Cassadine is because she arranged for Bill Eckert’s coffin to be empty when it was dug up – and she is trying to throw Sonny and the PCPD off the real impostor’s trail.

In other “General Hospital” news, Carly and Jake – Jason Morgan (Billy Miller) have a serious talk about his memory lapses and what is going on with him – and according to the spoiler video on Tuesday she reveals that the gun and the ski mask were not the only things that she found in his bag. Also, the “General Hospital” spoiler video for January 27 teases that Lulu and Johnny Zacchara (Brandon Barash) will spend some more time together, and they appear to be discussing her marriage with Dante! Because that won’t end in a disaster or anything.

So GH fans, do you think Fluke is Bill Eckert, or did Helena have his coffin emptied to make Sonny think that he is Bill Eckert? What else did Carly find in Jake’s bag, is it a clue that he is Jason Morgan? Will Lulu actually go too far with Johnny, could her marriage be in trouble? Let us know what you think in the comments below and don’t forget to check CDL tomorrow for more “General Hospital” spoilers and news.